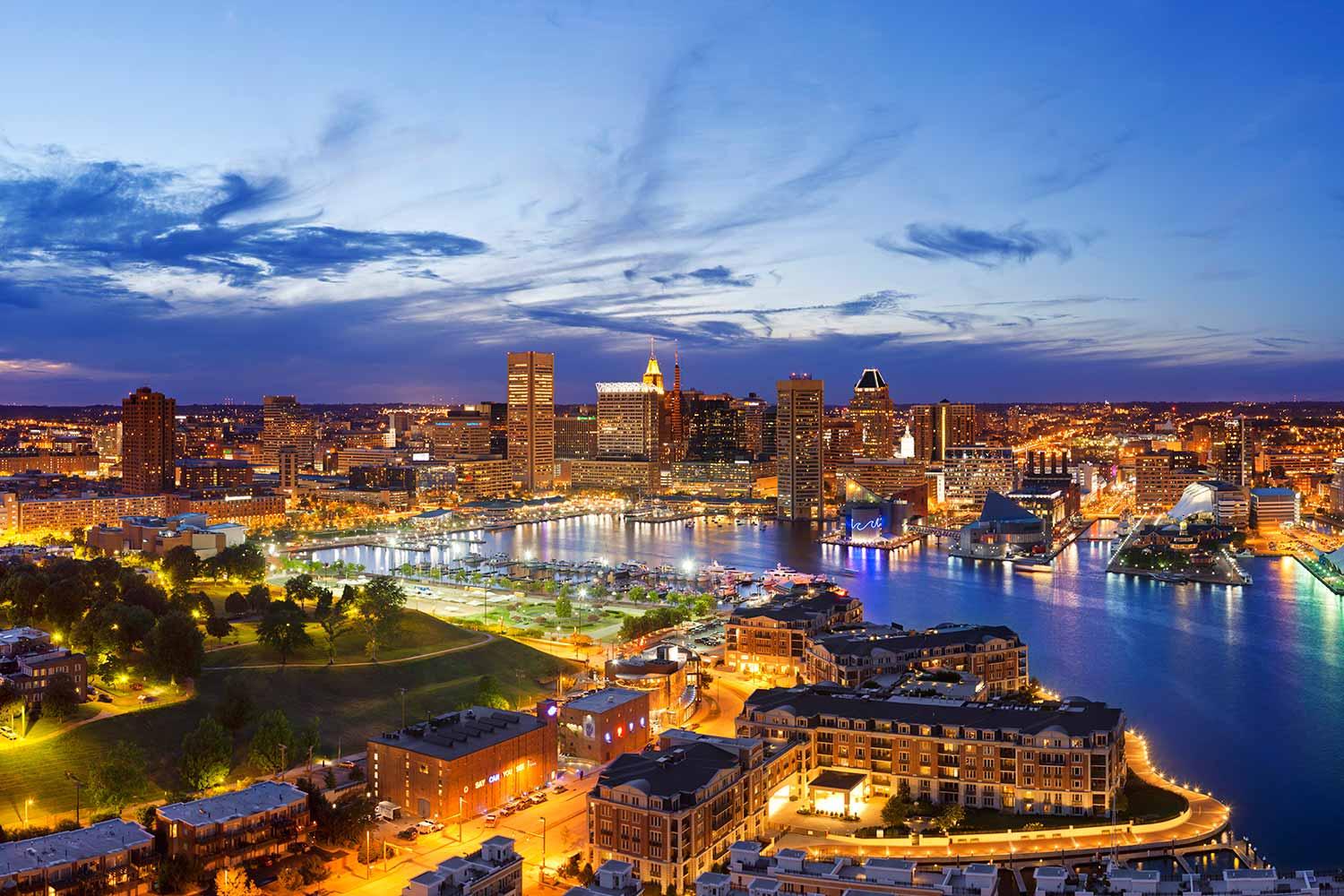 A few months ago, Steve Monnier, a former Michelin two star chef opened his new restaurant Aromes, just off “the Avenue” in the Hampden neighborhood of Baltimore. The restaurant sits kitty-corner to the yet-to-be-opened Paulie Gee’s–a pizza import from New York–and is within walking distance of Woodberry Kitchen, the food baby of James Beard award winner, Spike Gjerde. In addition to being geographically well-positioned to make its mark on Foodtimore, Aromes is conceptually food-forward and is pushing the envelope in Charm City of what it means to enjoy fine dining. I just hope Baltimore can sustain it.

Shimmy For B’more JT…It Gets Better.

Aromes is farm-to-table French dining, served in 4 or 6 tasting sized(small) courses prix fixe style (For 1 price, you go all in).  The menu changes daily, which means as a little piggy, it’s likely you won’t eat the same thing twice. For the chef it is an opportunity to experiment with new flavor combinations and to create dishes, like the fois gras with rhubarb ice, that melted off my tongue and into my memory as one of the best dishes I have had in a long time. Anywhere. 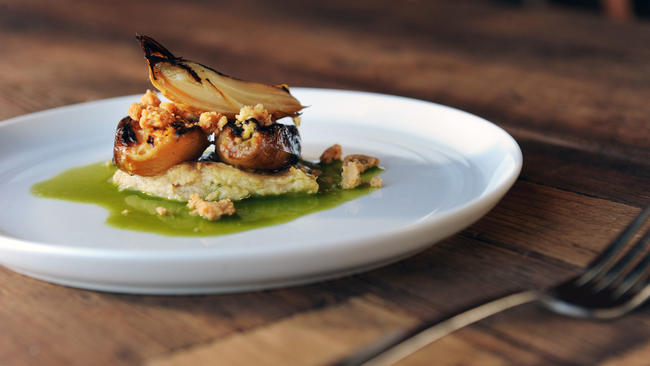 This is not the fois gras (obvi), but it is some of the food at Aromes!

Of course, the concept has its limits, and Chef Monnier has some work to do to refine a menu with dishes that stick, like the poached salmon wrapped in kohlrabi with nettle leaves, and will keep the foodie cliques of smalltimore coming back for more rather than gossiping about the savory ice cream flop. If Monnier can hone is craft to consistently deliver 6 quality dishes, in an intimate but no-frills BYOB establishment, I would be more than happy to return to pay the prix fixe pricing and then some.  With 1 or 2 misses, however, he is likely to find his customers opting for french fries down the block, instead of French food.

Although I don’t know enough about Kohlrabi to really reproduce that memorable dish, I made an attempt last night to reproduce the fresh taste of the poached fish I enjoyed at Aromes. I made poached salmon (poached in water with fennel, lemons, oranges, mustard seed, black peppercorns, onions, and celery) and served it with dill yogurt sauce. There’s not much to this dinner. So if you were looking for something hearty like say, swedish meatballs w/ plum sauce or fancy and delicate like, Chilean Sea Bass in Saffron Broth, this is not that. If, however, you are looking for a bit of a detox after over-eating for a night or two or following a birthday-cake indulgence, this poached salmon recipe will do the trick. 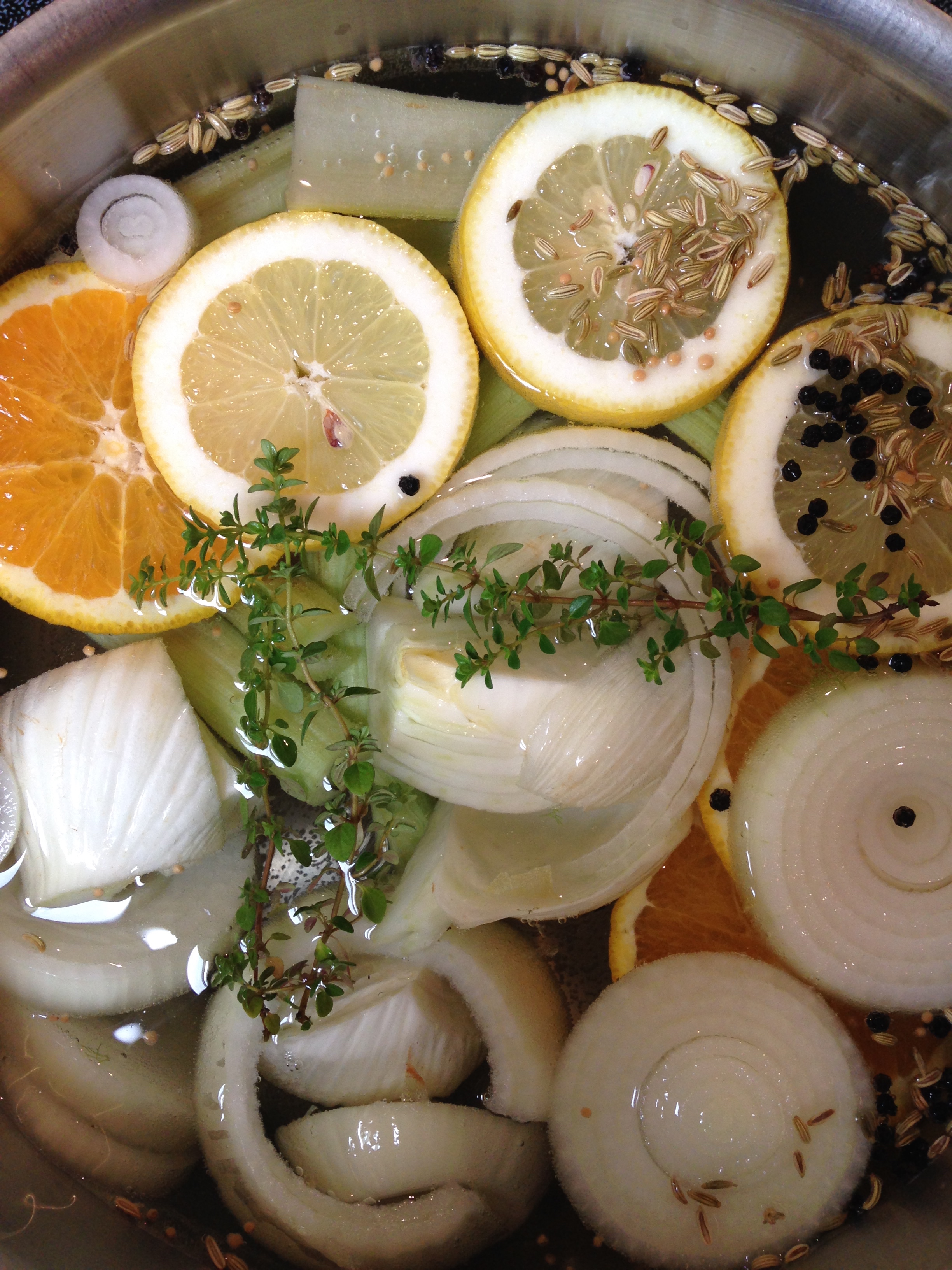 The best part of poaching salmon in water is that you can basically drop in all the vegetables you can think of and be fairly certain that the salmon will turn out fresh and tasty.  Poached fish is so light that you’re likely to go a bit hungry if you eat it alone, so I suggest eating it with a side of pearl couscous and drizzled with olive oil, a fresh basil pesto, or this simple dill yogurt sauce. 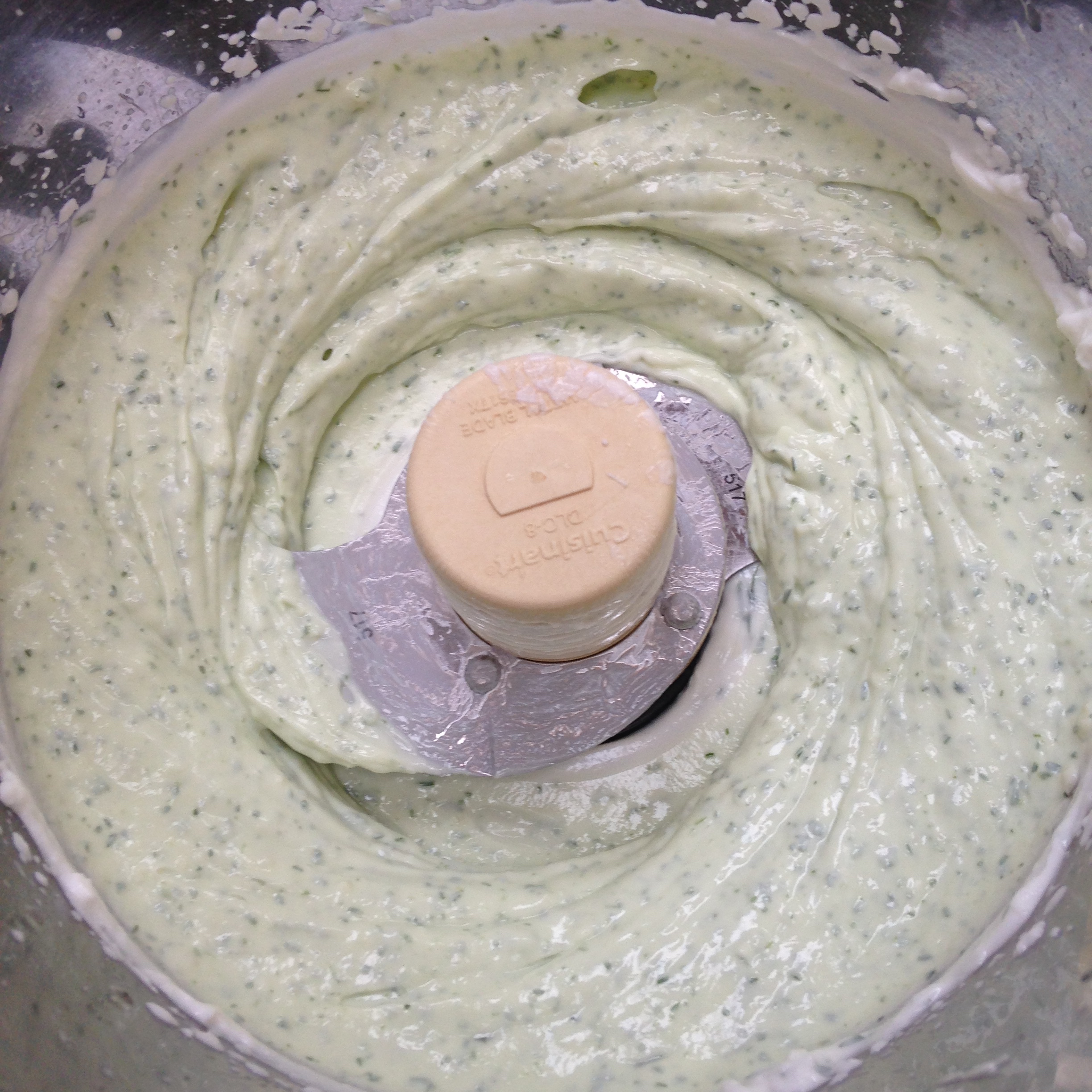 The steps to prepare this meal are few and easy to follow, so rather than go on and on with photos of ingredients, let’s just be real for a minute:

2) Chop and dump in all of the ingredients.

3) Bring it to a boil then reduce to a simmer

4) Drop the fish fillets in and cook for 5-7 minutes (until the fish is opaque).

To make the yogurt sauce combine the sauce ingredients in a food processor and blend. Serve together on a plate with a nice glass of white wine. Avoid the savory icecream…but maybe dig into that last bit of cobbler?