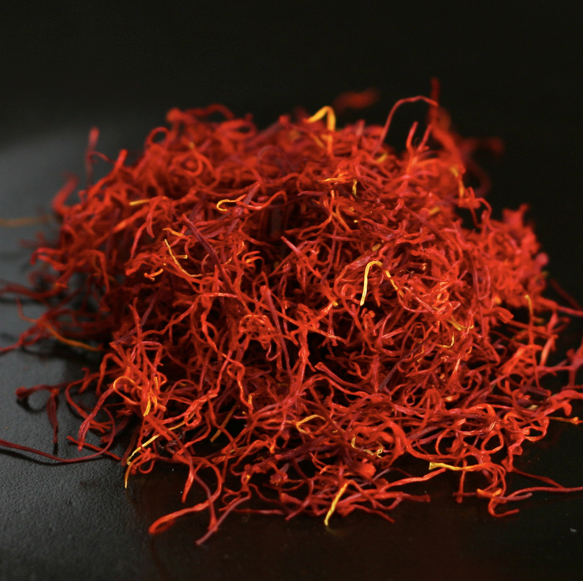 If you haven’t been to Spain, I highly recommend that you put it on your list of dream vacation destinations. Spain is educational, Spain is beautiful, and Spain is delicious. Spain, as the gateway to Europe, has a rich history of foreign occupation, cultural integration, repression, and revitalization. You can taste it in the food, hear it in the music, feel it in the dancing, and see it in the landscape.

The last time I can remember buying Saffron, I was 20 years old and living in Madrid. Saffron is everywhere in Spain and it’s beautiful–fiery, almost iridescent red with bright yellow tips–not like the product we get in the US that is sometimes an over-dried deep maroon. If you’re lucky enough to be able to plan a visit to Spain in the fall, take your camera and your nose and head south from Madrid. Be sure to stop in Toledo (the original capital of Spain) on your way before ending up in Consuegra for the Saffron festival.  Buy as much Saffron as you can and enjoy the rest of the day driving through La Mancha, snapping some nice photos of the windmills that are right out of Don Quixote on the way back. 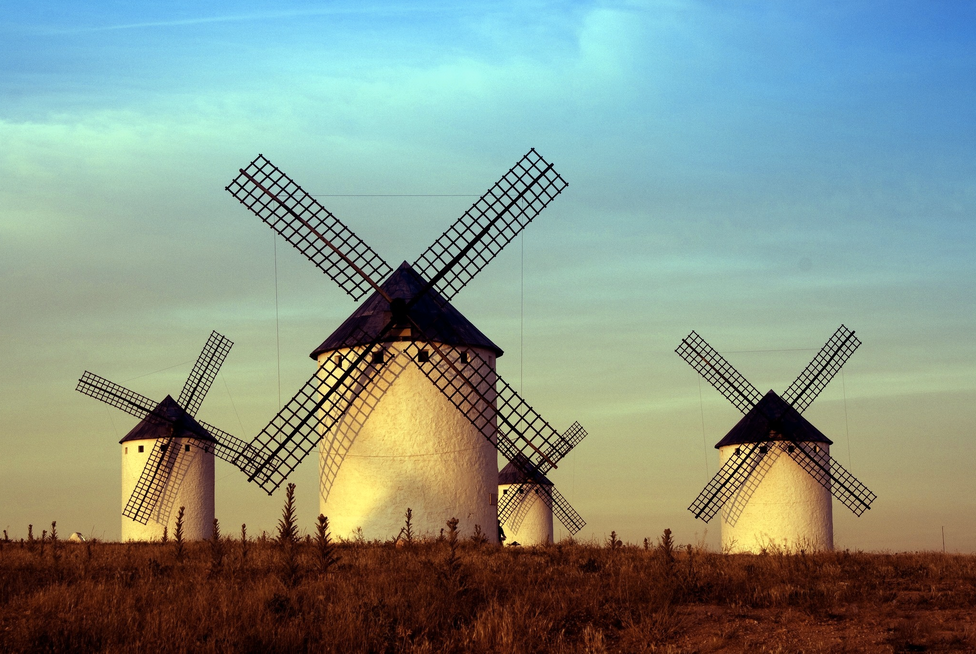 Perhaps the most famous use of saffron is in the making of Paella-a dish I hope to master soon-but after Monday’s meal, I’m convinced that the best use of saffron is actually in making saffron broth–a combination of fish stock, shallots, thyme, cinammon and saffron suggested by Gabrielle Hamilton, in her new cookbook PRUNE. Gabrielle suggests pairing the broth with cod, cabbage, leeks, and potatoes. To which I say: No, yes, yes, and absolutely not. I used chilean sea bass and sweet potatoes, and I am certain this is the way to go.

Obviously, sea bass is a good bit more expensive than cod, so if you are on a budget go with the cod. Chilean sea bass adds a richness to the flavors that makes the experience really intense in a great way. The sweetness in the sweet potatoes some how cool and balance the spices. This dish has simple ingredients, is fairly easy to make, and is 100% delicious. If anyone tells you otherwise, don’t trust them.;)

The amount of flavor unleashed in this dish is unreal. I used fresh vegetables and fish, spice and herbs, fish stock and very little else. Although there is butter on my ingredients tray (below), I ended up searing my fish with olive oil instead to make it a tad healthier than it already is. 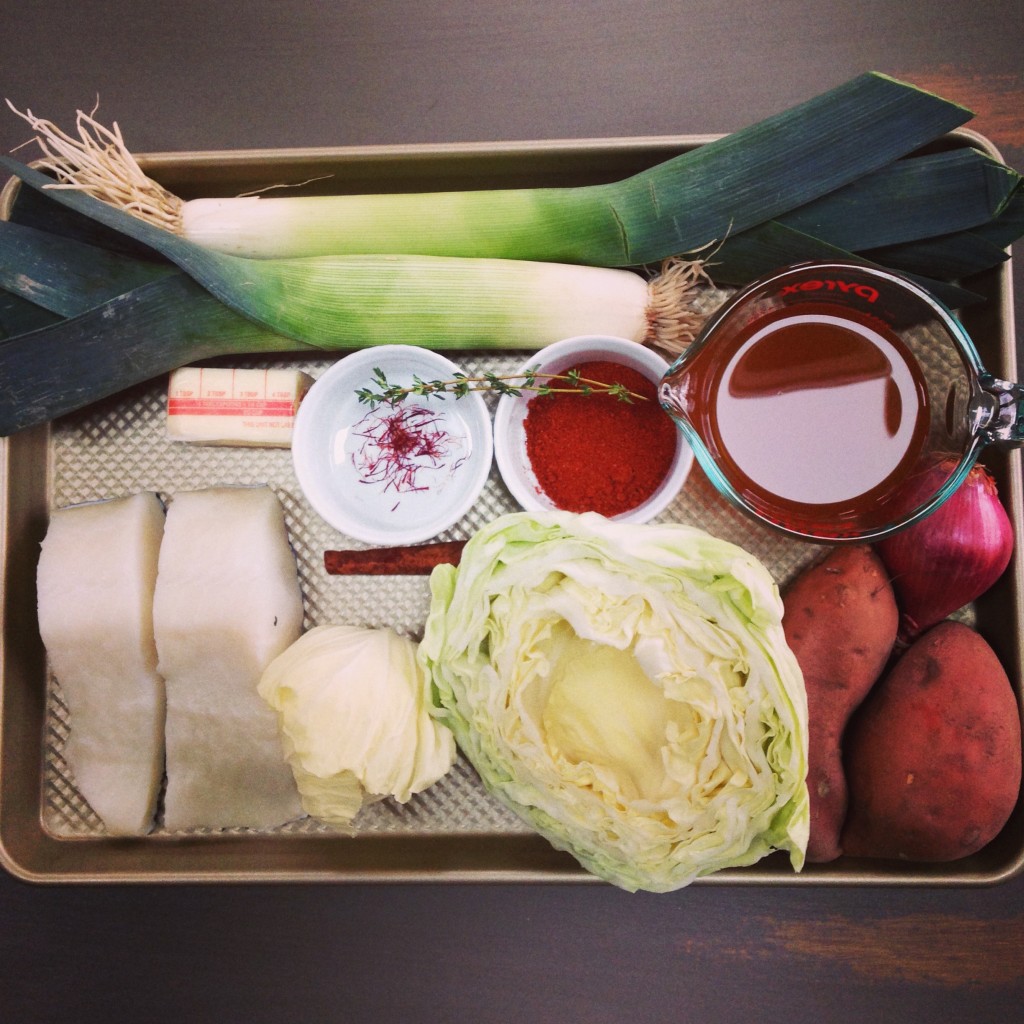 This tray looks so good, I wish I had made more!

The best part about this amazing meal, is that if you were to use multiple pots on multiple burners, I think you could get the cooking done with this dish in under half an hour. It’s also very easy to adjust your portions as you go. As you can see in the photo, the meal is simple. Fish in a broth with sweet potatoes, cabbage, and leeks. As you chop your vegetables, think about exactly how many veggies you’d like to be eating when you sit down at the table. Are you mad about hot lettuce but not so crazy about sweet potatoes? That’s fine, just add fewer potatoes.  I was making this meal for three people, so I bought 3 5oz fish filets, 3 small potatoes, a head of cabbage, 2 large leeks, and 1 medium shallot.  I ended up only using about half of the cabbage, because I didn’t want it to over-power the other flavors.

First, I filled the largest pot I own with 7 cups of water and salted the water with kosher salt. I asked my friend Andy, who used to be a chef at Gramercy Tavern, about how to determine the right amount of salt. Does the difference between lightly salted, salted, and well-salted actually make a difference? How does it affect the boiling time. “It depends” was his response. I didn’t measure my salt, but when I was done the water tasted salty-sweet v. over-powering/scrunch up your face salty. If in doubt, I suggest adding less salt v. more. It’s important to note that the salt from the water is absorbed by the vegetables as they boil, so don’t go over-board with the salting.  You can always add more salt, but you can’t take it out.

As I brought the water to a boil, I sliced my potatoes and leeks into discs, minced the shallot, and sliced the cabbage (removing the bottom and the center). I placed them in separate containers and set them aside. First I boiled the sweet potatoes (10 minutes) and removed them from the pot and set them to dry.  Then I tossed in the leeks (8 minutes), and finally the cabbage (5 minutes). The only true way to tell when you’re done is to do a taste test. When they were hot, the sweet potatoes tasted as though I could have made mashed potatoes in a hurry, the leeks and cabbage were both soft, bright green and a tad crunchy). 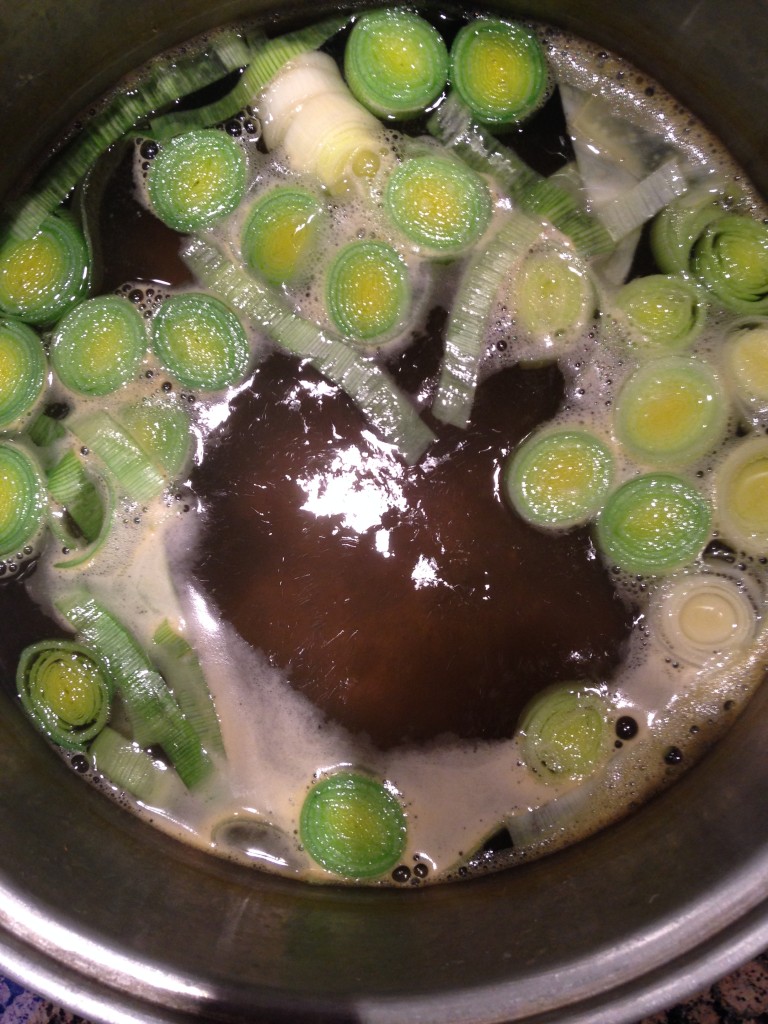 While my vegetables were drying, I removed the pot of water. On medium high heat, I heated 2 tbsp of olive oil in a sautee pan to the point where the oil easily moves around the pan, but not so hot that the oil has started to bubble or crackle.  With that heating up, I readied another sauce pan adding the shallots, fish stock, cinammon stick, thyme, and saffron. I let the saffron sit in the fish stock for a few minutes and watched the saffron pieces transform the liquid from a semi-translucent brown to a nice yellow. These little guys are potent! 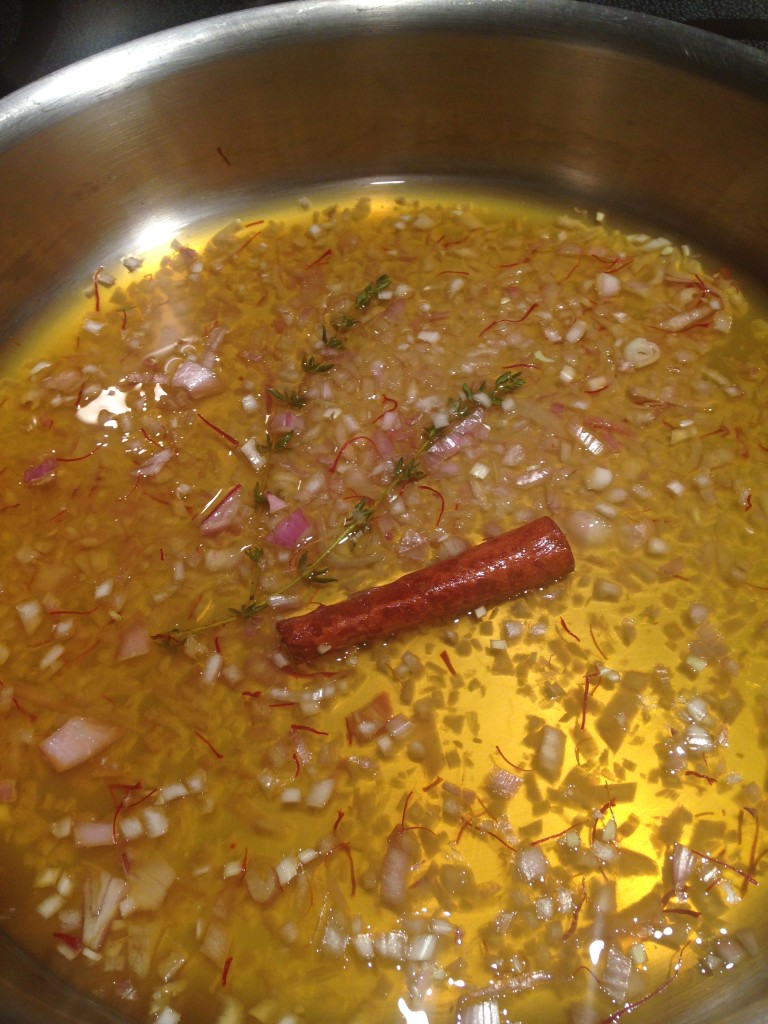 Then, I multi-tasked! I seasoned both sides of the sea bass filets(tops and bottoms) and seared them one at a time in the olive oil (4 minutes on each side) having turned the temperature down to medium heat. While cooking the fish, I brought the broth to a simmer and let it cook down. I did this a few times, each time adding a bit more fish stock to the broth. 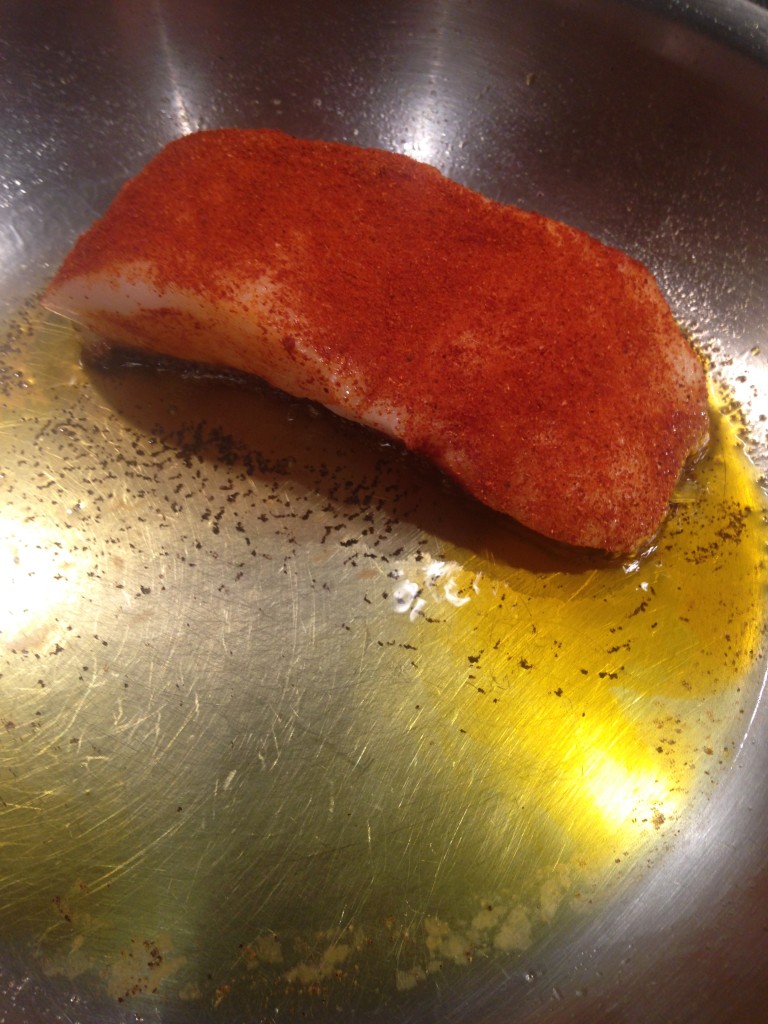 Finally, I tossed my boiled vegetables in with the broth and readied the dish to be served. 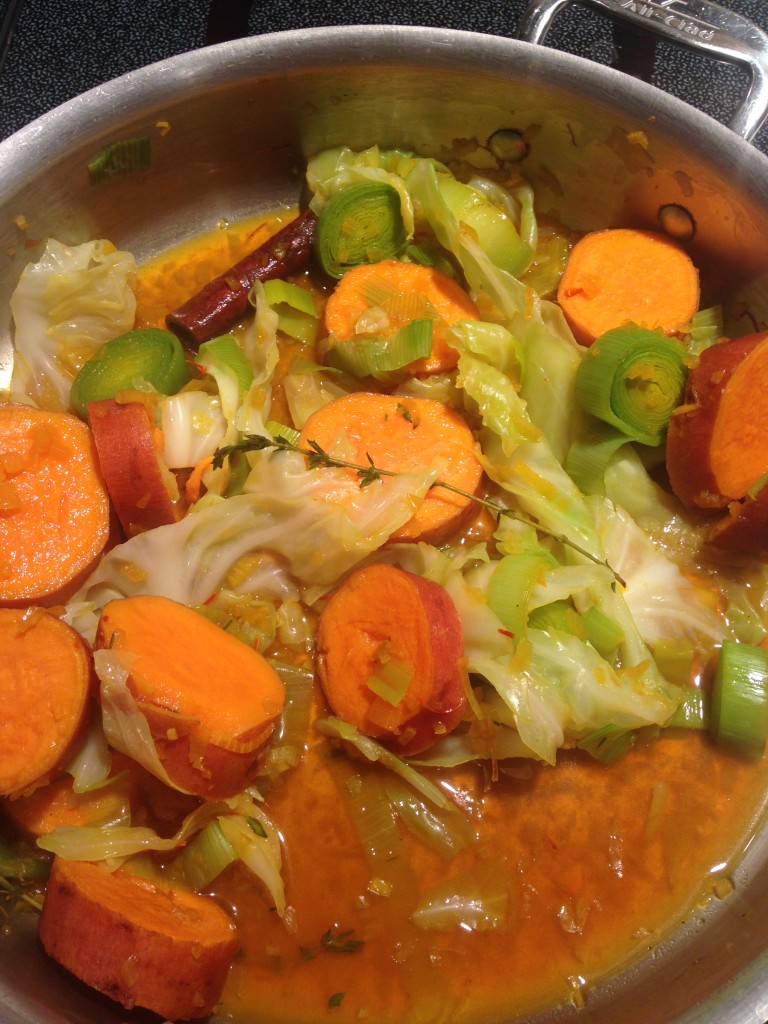 I know it doesn’t look very fancy, but trust me. The combination of flavors is sure to impress. I hope you enjoy it as much as I did! 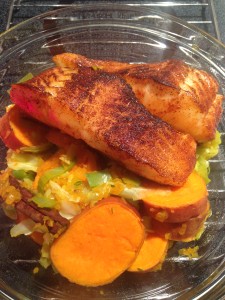