This week the media was filled with stories about Prince Harry who recently arrived in the the US to open a chain of strip clubs called “Queenies” . .  .I mean… to kick off the second installment of the Invictus Games–a sporting event for wounded war veterans. Harry, apparently inspired from his tour in Afghanistan, decided in 2014 to launch the first Invictus Games in London to salute the men and women who make real mental and physical sacrifices at war so that we can enjoy peace and freedom at home (aw thanks Harr-Bear)! The duke opened the games on Sunday (May 8th) in partnership with Michelle Obama, who called Prince Harry “truly our Prince Charming.” 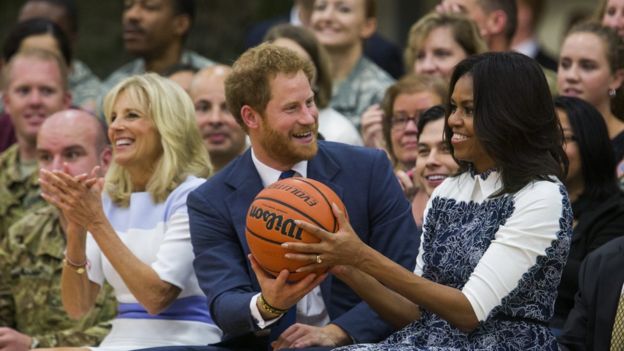 “Hold my balls for a second, Michelle?” –Harr-bear.

I can’t slam Michelle too hard though, the royal PR machine is a thing of miracles. Supporting the Invictus launch this week are articles flanking both sides of the atlantic propping Harry up as Britain’s reformed and most eligible bachelor. Pictures of Harry and puppies, Harry with veterans, Harry and Diana. How can you not believe? Now, if only I had the royal PR engine at work for meeee, maybe I would be a permanent staple on the food network, or a YouTube star, or the logical choice for President in November! Oh well. This pie is so awesomely delicious that I’ve made it literally four times in the last two weeks!  I like to make this pie in two stages over two days (crust on day one, and the filling/topping the day of). The only way to really mess up this pie is if you top it with whipped cream far in advance of eating it, leaving time for the whipped topping to melt back into cream and seeping into the dulce de leche making the pie a bit messy (although just as tasty). If you make a mistake along the way or if the condensed milk doesn’t turn out as thick as you’d like, you can deconstruct this pie by chopping it up and serving it in a glass with layers of whipped cream in between the crust, dulce de leche, and pie filling.  If you’re as gluttonous as I am, you may even prefer this version to a fresh cut piece of pie-easier to shovel down the hatch! To make the pie crust…

preheat your oven to 300 F. Combine your dry pie ingredients in a stand mixer set to low or medium speed until fully combined. Melt 6 tbsp of butter and pour into the mixture (with the stand mixer still running on low-medium speed). The mixture should form clumps.

Empty the clumps out onto a piece of parchment paper or a Silpat and place into the oven for 10 minutes. The clumps should dry out a bit and harden while cooling. Once fully cooled (I sometimes place into the freezer for quick cooling), place the clumps into a food processor and pulse until the clumps disappear and you are left with pie crust dust. Remove from the processor and place the dust into a small mixing bowl. Melt the remaining butter (1-2 tbsp) and pour into the crust dust mixture. Swirl the mixture around, mixing the butter into the crust dust. The mixture should be a bit wet at this point, but should not be watery or runny. Empty the mixture into a tart pan (ideally with a removable base. You can also use a regular pie dish here, but if you have a tart pan, I recommend it. It’s much easier to cut a perfect piece of pie from a tart pan than from a pie dish! With your fingers, press the the tart mixture into the base of the pan and up along the sides to fully cover the inside of the pan. Place the pan into the oven on a cookie sheet for about 8 minutes. To make the dulce de leche…

There are many different ways to do this…if you’re in a complete pinch for time, the easiest [read: most despicable!] way is to run to the supermarket to buy some dulce de leche in a jar and smear it on top of your pie crust. Jar bought dulce de leche is tasty, but a bit unpredictable in viscocity though. So if you want to really control the thickness of your spread, I recommend spending the extra two hours or so to make it at home. Preheat the oven to 425F. Empty two cans of sweetened condensed milk into a small baking dish. Place the dish inside a larger glass pyrex and fill the pyrex with water so that the water is half way up the pie dish. Cover the dish with aluminum foil and place into the oven for an hour. Remove from the oven and mix the condensed milk vigorously with a fork or whisk. Recover the dish, refill the pyrex with water, and place back into the oven for another hour. The condensed milk should turn a nice caramel brown 30-45 minutes later and be nice and thick when you remove it from the oven at approximately the 60 minute mark. To make the pie… Almost ready for The Great British Bake Off,