I was never so delusional as to think I was fully Asian (hello…my mom’s a ginger. I’m not blind, duh.), but my conviction was strong that I was at least part Asian. That was that. Russell Wu, the great jewpanese.  It’s my family’s fault really. They played into my non-specifically ethnic look with a series of made-up stories that I heard so many times that, with time, I came to believe–my Great Great Grandmother so and so had a fling with a mongol near the Russian border. My cousins used to tease me that I had a magic disappearing birthmark, a “Mongolian spot” that was the true stamp of Asia. I was the great great great great great great grandson of Genghis Kahn. Asian royalty thank you very much.

Many years later, in December of 2008, I was shipped to Singapore. Asia (my people!) were saving me from the great economic implosion at home. By this point,though, the Asian had been thoroughly karate chopped out of me.  In sixth grade, during a “family history” conversation, I shared my famed lineage and was laughed out of class. Just another jew from Baltimore:(. Nonetheless, at 29, the thought of my big Asian home-coming, gave me a good chuckle.

In Singapore, more often than not, I was the weirdo white guy at the table. It became a running joke for friends to ask new people I met where I was from. Half Chinese? a quarter Vietnamese? a misplaced Puerto Rican? Idiots. Obviously, not. I was the one and only great Jewpanese. . .

Anyhow, here is my recipe for Japanese spaghetti and meatballs….meatballs made with dried miso, edamame and shishito peppers cooked in teriyaki sauce and served over udon. A must try.

These meatballs are inspired by an instagram post I saw recently by dennis prescott, who takes some  mean, mean food photographs. For as often as I seem to be cooking, he seems to be doing laps around me. I’m going to pretend that he has four or five cooking elf assistants to make myself feel better. Maybe it’s true?   In any case, he recently made meatballs with hoisin sauce, which looked delicious. I thought to try and one up him with a japanese version, which came out very well. Perhaps a meatball duel is in order?

To make these awesome Japanese meatballs, first gather your ingredients place it on a tray so it’s within arms reach.  You will need a grated zucchini, a package of dried miso (dried miso soup works fine), 6 shishito peppers, 1/4 cup edamame beans, approximately 1 lb of ground turkey (dark meat), 1/2 cup of teriyaki sauce, 7 tbsps of olive oil, 1/2 tsp of salt, and 3 servings of udon. To make the meatballs, first prep the vegetables. Cut the edamame beans in half.  Pour 1 tbsp of olive oil into a small sauce pan and heat the oil on medium heat until nice and hot.Meanwhile, remove the tops of the shishito peppers and slice them laterally into small circular discs (like jalapenos). Shishito peppers are usually very mild, so there’s no need to remove the seeds. Once the oil is very hot, add the slices of peppers and cook briefly for 30 seconds to 1 minute. Remove the peppers as soon as you see the skin turning black-we want the peppers to become tender in the oil, but we’re not trying to burn them. 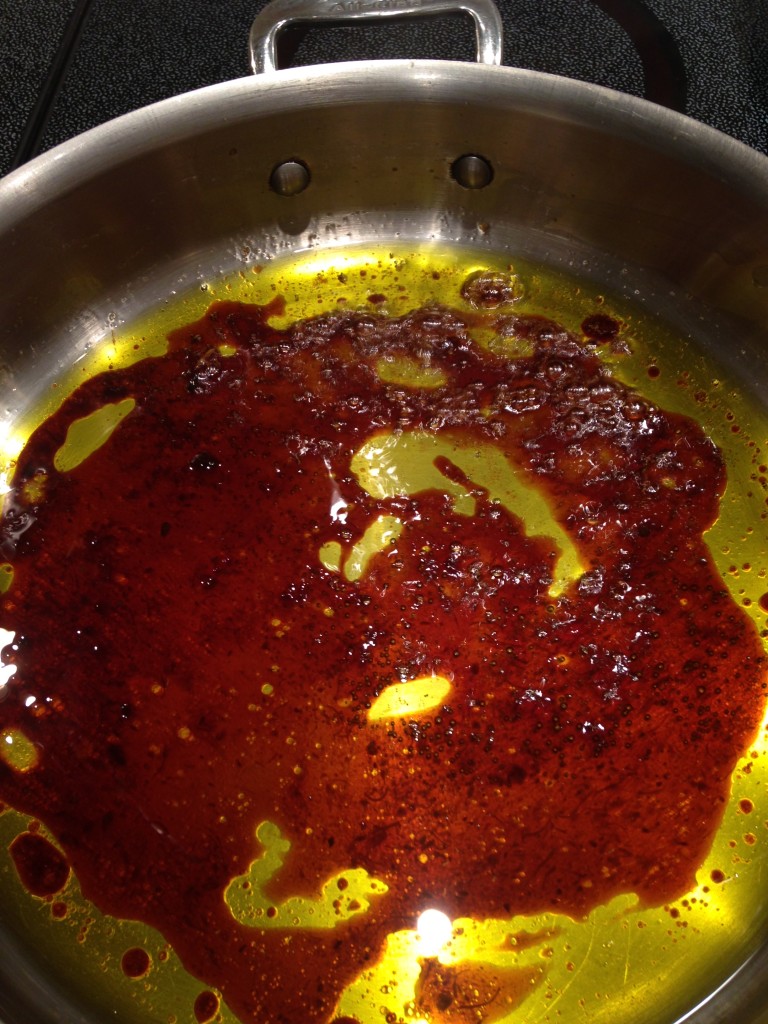 Once the meatballs have been formed, place a very large sauce pan over medium heat. Add the remaining olive oil and heat the oil until very hot–you will see the oil appear to get thinner and it will roll around the pan with ease. There should be about 1/8 inch of oil on the bottom of the pan. Depending upon the size of your pan you may need to add more or less oil. Don’t be stingy here. Most of the oil will end up thrown out, so it won’t be as unhealthy as it sounds. If there is too little oil, however, the meat will stick to the bottom of the pan and make it very hard to keep the meatballs well-formed. 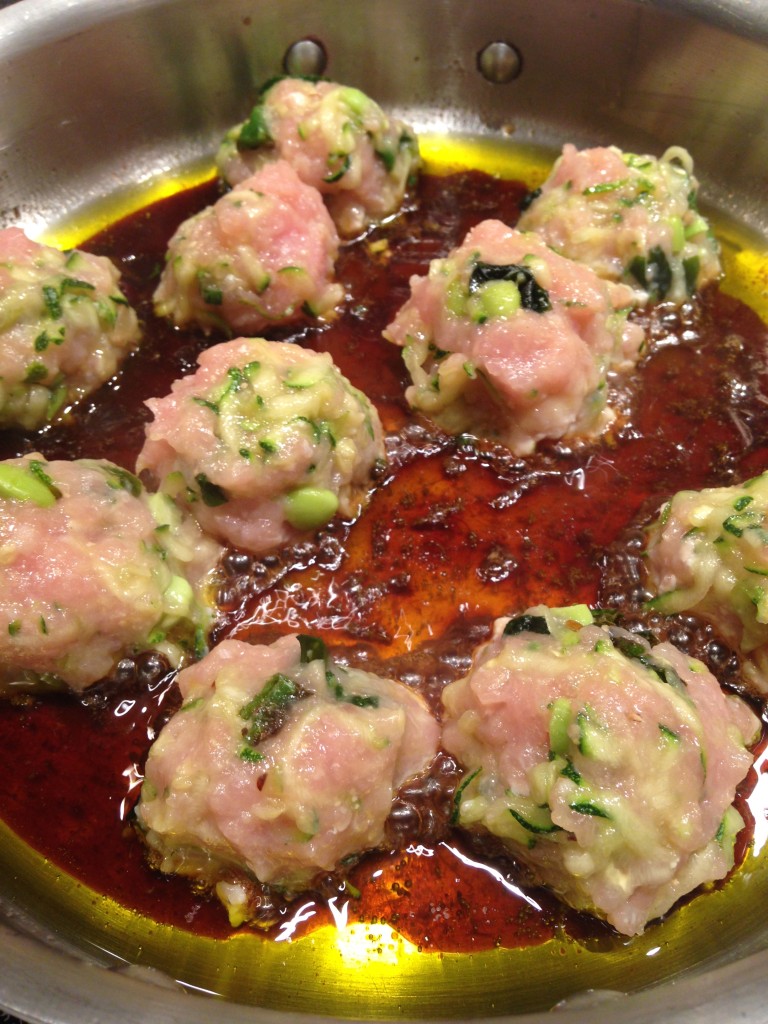 With the meatballs cooking, place a medium-sized pot of water onto the stove and bring the water to a boil. With the water boiling, add the udon to the water. Reduce the heat and simmer for an additional 10-15 minutes while you finish the meatballs. When the meatballs are finished, the meatballs will feel stiff if you press on them with a spatula. Remove the pan from the heat immediately and take the meatballs out of the pan with tongs. Empty the teriyaki and oil into the bowl that you will use to serve the meal. 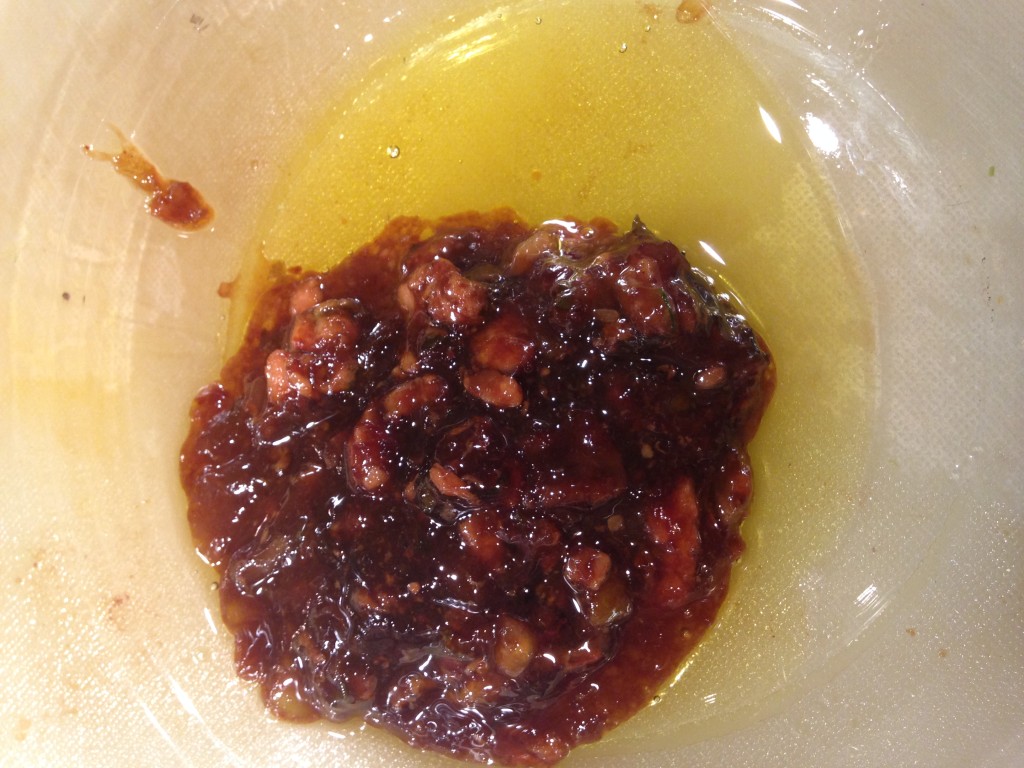 Strain the udon and transfer to the bowl with the teriyaki. With tongs, twist the teriyaki around so that the sauce fully coats the udon. Place the meatballs on top and serve! DEEEEEEEELISH;)