Can we talk about chef plagiarism for a minute?

When does a recipe belong to someone, such that he/she can pop it into a new cookbook and sell it to amass a $100 million fortune? When does the recipe need to come with a cute story about the origin of the meal or a simple footnote on where the recipe came from? Are we to believe that celebrity chefs pull enough recipes out of thin air to mass produce cookbooks?

Of course, the more you cook, the more you can make connections between ingredients. Lamb and figs for example are delicious together. Shallots and rosemary together make a great flavoring for a broth. Put it all together with some cinnamon and olive oil…now that’s a good meal. Sometimes you can take a small leap and pair two things together based on imagination and be happily surprised–my honey sriracha roasted artichokes, for example. 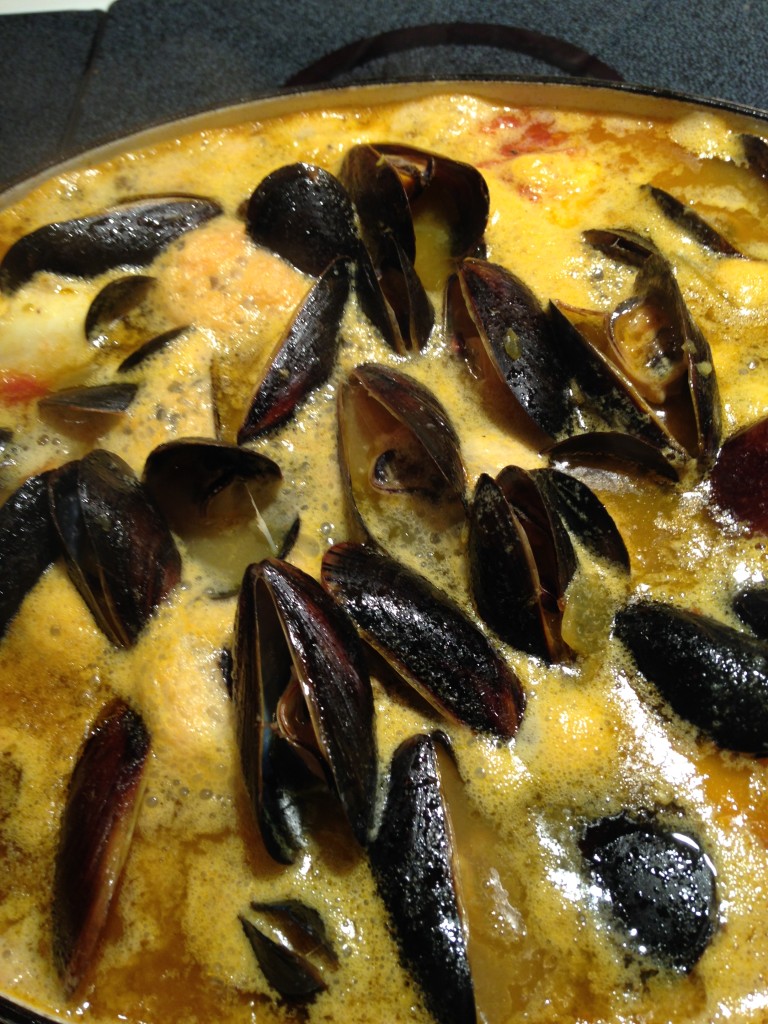 More often then not though, recipes are variations of traditional dishes. Perhaps there’s a surprise technique used or an ingredient thrown in, but there’s usually a back story to be told–a chef, a grandmother, a culture etc.

For example, I love how Yotam Ottolenghi’s cookbook, Jerusalem (published in 2012), tells these stories giving credit to the people and cooks of Jerusalem who modified traditional dishes with new flavors to put middle eastern food on the modern culinary map.  His recipe for Seafood and Fennel Stew, he notes, is inspired by traditional Tunisian fish stew brought to Israel by Jewish immigrants from Tunisia.

The recipe I made last night is a variation of Ottolenghi’s recipe. The ingredients are very similar (omitting a few spices and clams). Both dishes call for Pernod, garlic, fish stock, fish, mussels, fennel, and onions. The recipe I used, with no reference to another chef, came from Ina Garten’s new book (published in 2014) called Make it Ahead. In fairness, it had some interesting twists–orange juice, anchovies etc.I did like how this dish could be made in steps, and it’s true, I could almost have made it ahead–like in 2012 out of Ottolenghi’s book… 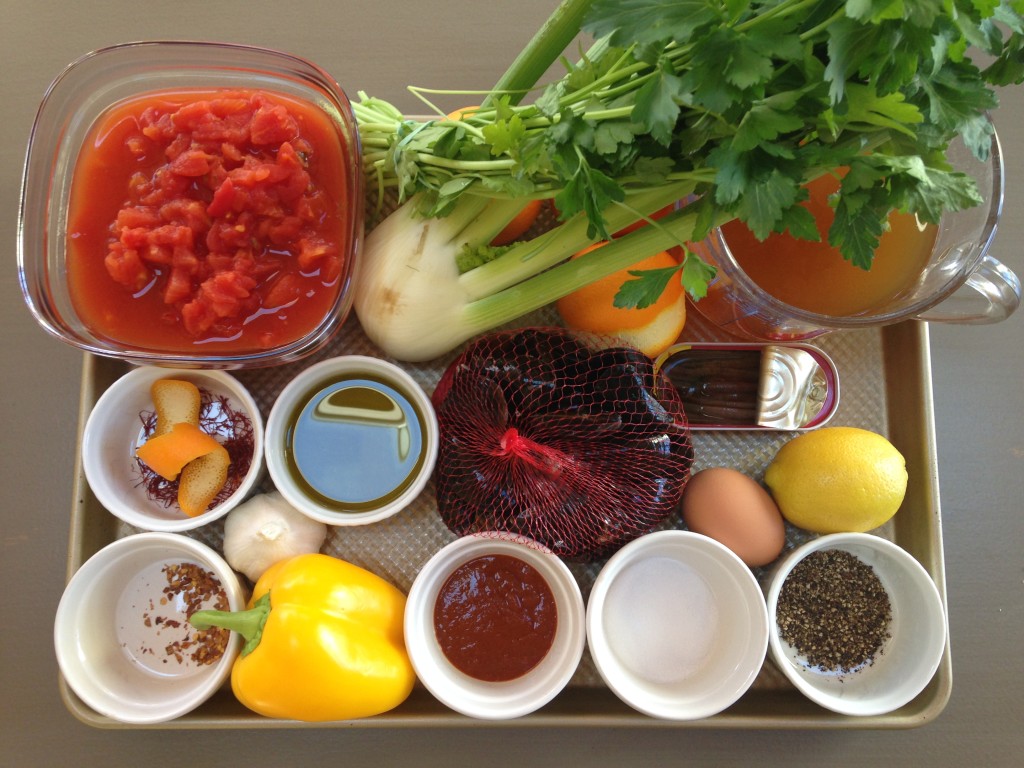 In fairness, food is part of our shared culture. Who is to say the recipe belongs less to Ina and more to Yotam or less to Yotam and more to the immigrant Tunisian-Jewish community or less to the Tunisian-Israeli immigrants and more to the Tunisian natives? The similarity in the dishes seemed odd to me, but even if one chef was influenced by another, is there an obligation to attribute the influence? If not, could someone out there simply shuffle all of these chef’s recipes and re-publish them as their own? For home-cooks and bloggers as for professional chefs and restarateurs, where is the value in what we create? Is it the recipe? Is it the experience? Is it in packaging it all together?

In any case, here is a delicious recipe for a Tunisian-like fish stew with mussels and shrimp,  which I made making some slight modifications to the recipe in Ina Garten’s book. I hope you enjoy the recipe, the writing, and the step-by step instructions I am providing;)

There are a lot of ingredients in this recipe, so taking time for your mis en place can be very helpful for this dish. You will need: 3 cups of fish stock; 2 medium fennel bulbs; 1 can of diced tomatoes; 6 tbsp of olive oil; 8 cloves of garlic; 1 large yellow pepper; 1 medium onion;  a pinch of red chili flakes; 1 heaping tsp of saffron; 4 anchovies (in olive oil); 1 tsp of sriracha sauce; 3/4 cup freshly squeezed orange juice; 1 large orange zest; 1 tbsp salt; 1 1/2 tsp of freshly ground black pepper; 1 cup of dry white wine; 1 bag of clean mussels (about 30); 10 prawns, deveined, shells on or off; 1 lb of cod.

Again, there are a lot of ingredients here, so you will likely need an extra large pot or dutch oven. I used a 4 1/2 qt Le Creuset dutch oven, but the stew almost over flowed. I’d suggest using a 5 or 6 qt pot if you have it, or reducing the measurements slightly  (less fish, less stock; fewer tomatoes). 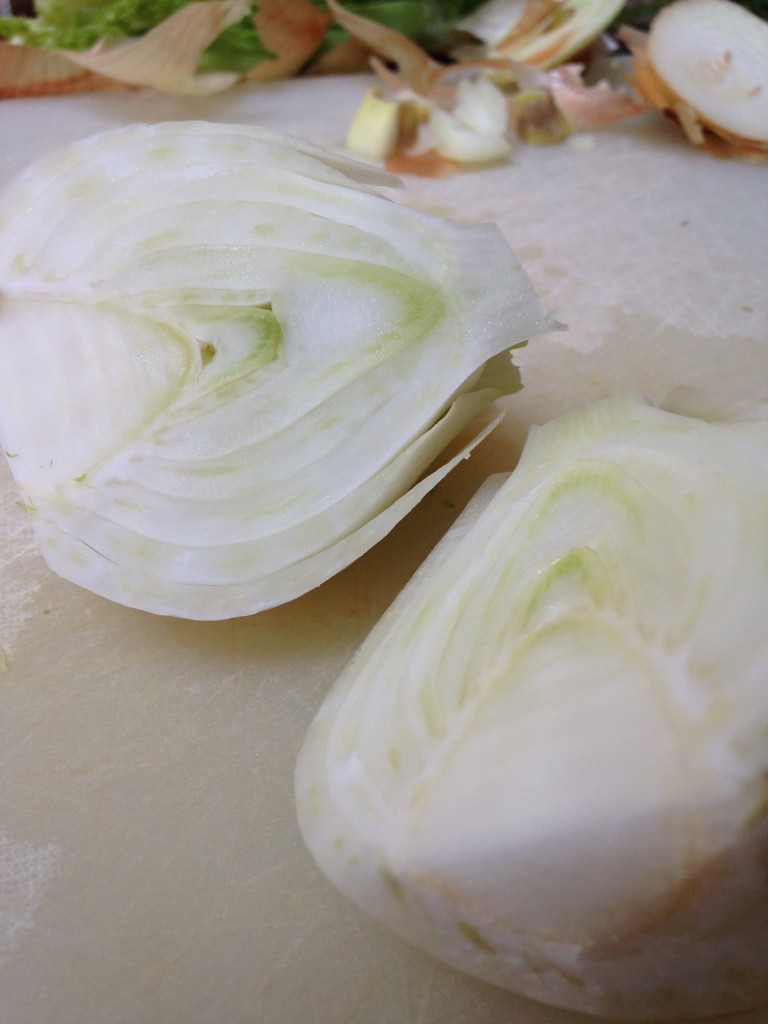 Heat the olive oil in the dutch oven on medium heat. The olive oil should appear to have thinned slightly. If you tilt the pot, the olive oil will run around the bottom of the pot easily. It should not steam or crackle prior to adding ingredients to the pot.  Dice the yellow pepper, first removing the top, the seeds, and the white pieces on the inside. Chop the onion. Mince the garlic and the anchovies, and dice/cube the fennel. 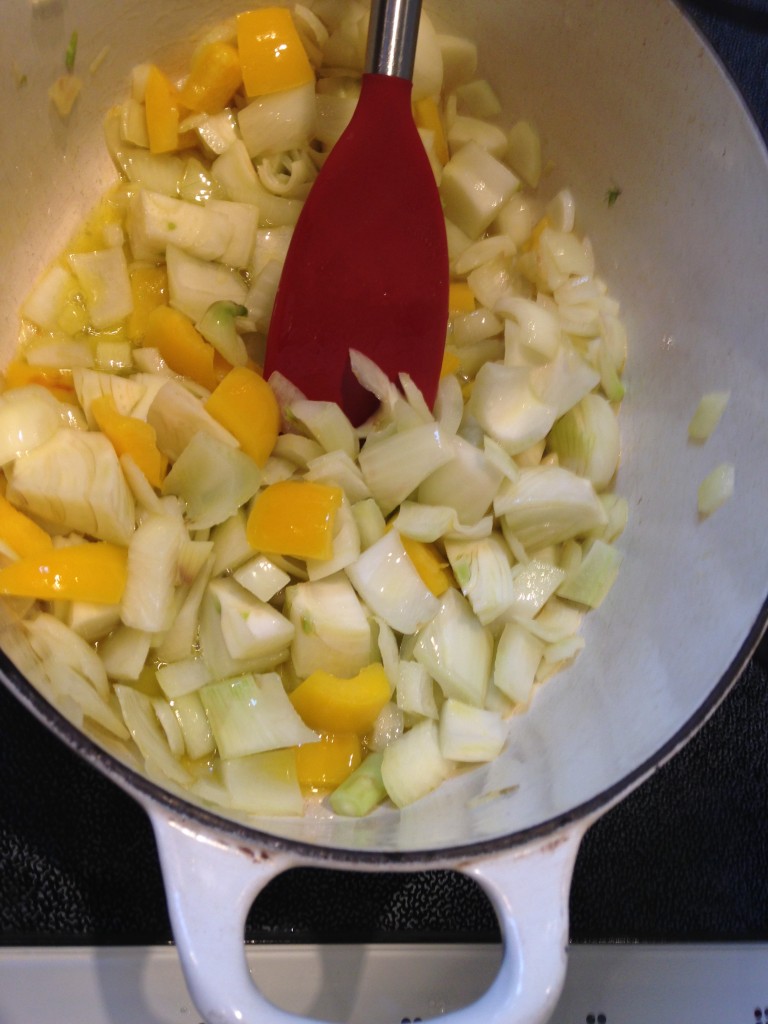 Add the chopped vegetables and anchovies to the oil in the dutch oven. Stir the vegetables and cook for 5 minutes, then add the red pepper flakes and saffron. Continue to cook (stirring the mixture often) for another 10 minutes or until the vegetables have softened and the onions are nearly translucent. 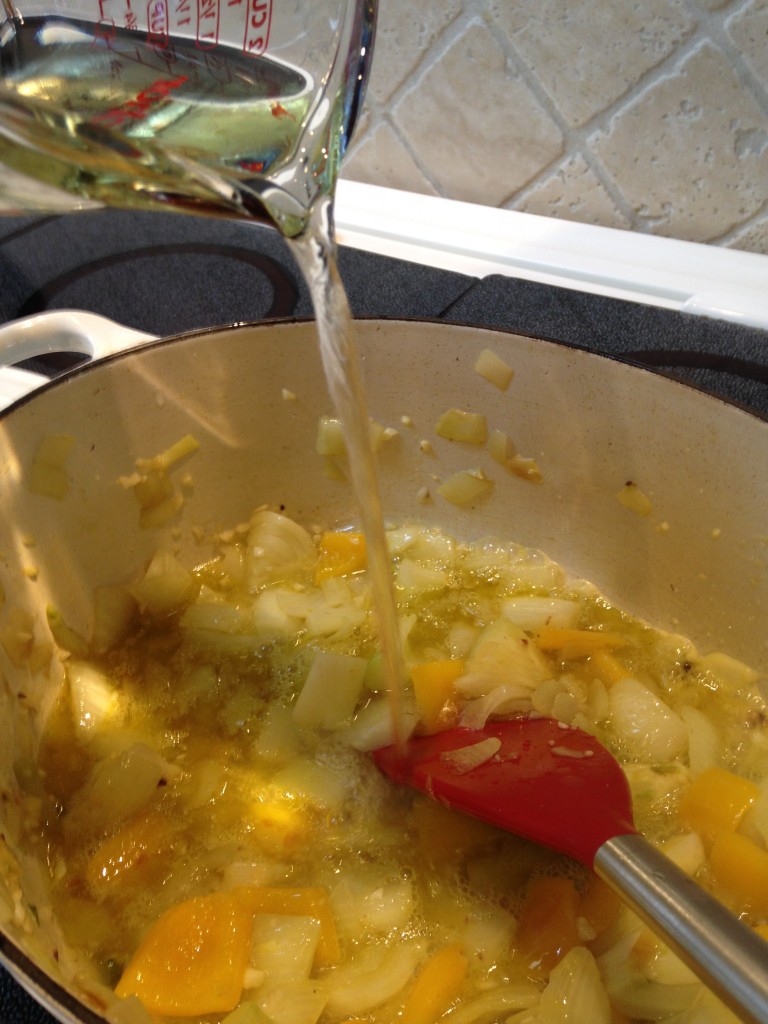 Add the white wine to the vegetables. Bring to a boil and allow the alcohol to cook out over the next few minutes. 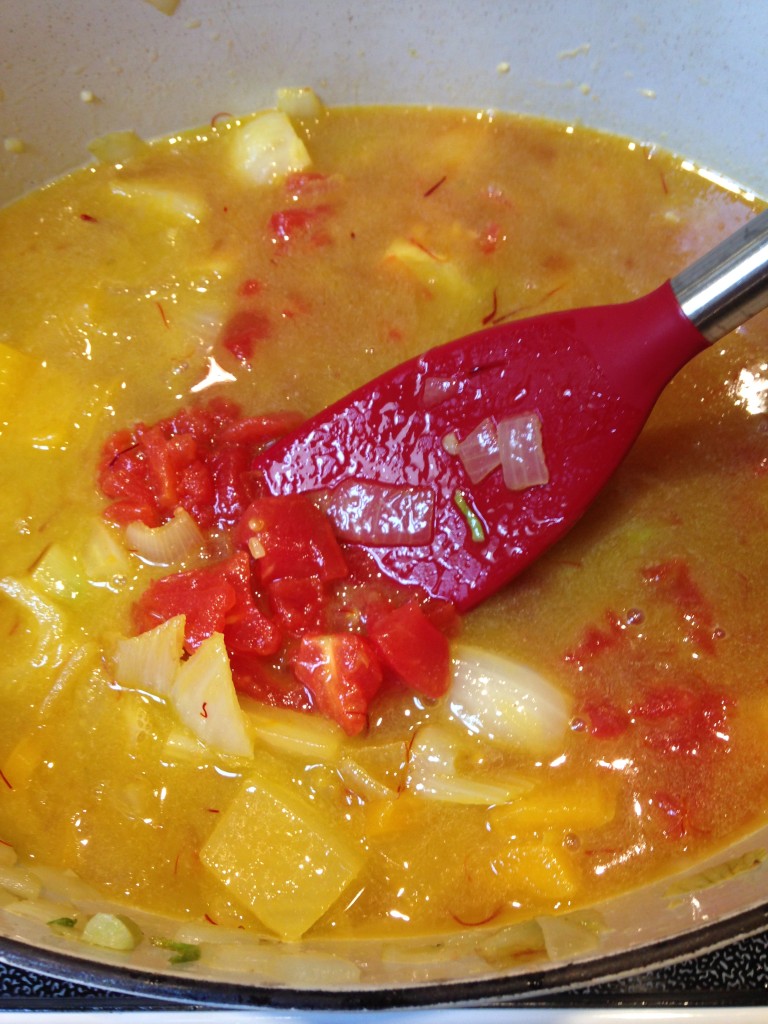 Add the remaining ingredients ( except for the fish and shellfish)–the tomatoes, the fish stock, the orange zest, and the salt and pepper. Allow the stew to simmer on the stove with the top off for another 25 minutes, stirring occasionally. Add the cod (or a similarly rich, lean white fish) and cook for 5 minutes. Dump in the mussels and shrimp and cook for another five minutes with the lid on.

That’s it! Remove the stew from the stove and serve in individual bowls. I like to place toasted french bread (or unsalted crackers/melba toast)  on the bottom of the bowl. The sauce/stew is delicious, so make sure you have something to sop it up with so you get every drop! 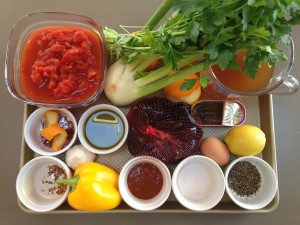