A few weeks ago, I spent a whirlwind 36 hours in New York City. It was my first #GrumpyTakesAll food adventure. The theme of the weekend was the great Grumpy invasion of NYC’s food emporiyums, which far from the palm-treed chick-fil-a atriums of my tweens, have carved out massive chunks of gourmet real estate catering to the city’s newly rich in a post-recession boom.  I first visited Mario Batali’s thoughtfully designed Italian mecca, Eataly, which opened in 2004, and followed it up with the newly christened “Le District”–a French inspired food court in the financial district, just a cubicle-crawl away from 1 World Trade Center and the 9-11 memorial.  I ate my way through both like a one-man locust plague. 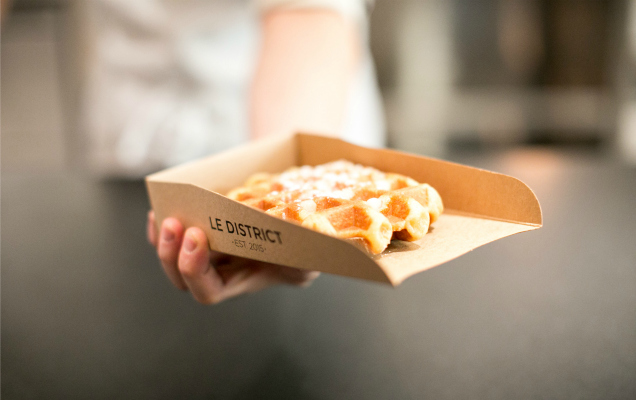 The visit to Le District, had me thinking about my time living in Paris in 2001, taking advantage of a pre-euro market with a strong dollar that could buy me all the croissants, macarons, cakes, and champagne I wanted. At Le District, after speaking with some of the food and flower vendors, I popped into the bakery and gobbled up my favorite French pastry, pain-aux-raisins. It was not quite as good or fresh as my NY favorites, La Bergamote or Ceci-Cela–two bakeries in New York I used to frequent with the most flakey, creamy, raisiny danishes outside of Paris, but, let’s be real, this little piggy will eat anything sweet.

If Honey Boo Boo Can…so can you!

Coming back to Baltimore, I decided to revisit France in my kitchen and experiment with making French pastries and baked goods. Pain Aux Raisins/ Croissants/ Kouign Amann are about to explode out of me, but I decided to start with easy and work my way up. Yesterday I made Clafoutis, which is a cakey-custard cooked in a cast-iron skillet. It’s a perfect dish to make for dinner parties when your back is killing you after spending time on a more elaborate main course and appetizer set. You can prepare the batter in a stand-mixer or even toss everything together in a blender before adding the cherries or other fruit and popping it all into the oven for 30 minutes at 425 F. Clafoutis is a regional French dish from Limousin, which is smack in the middle of the French country-side–South of Paris and smack in the middle of the country. If Belle from Disney’s Beauty and the Beast were to live somewhere in the real world, it would be here. I imagine that the original farmer-folk who created this dish went out into their farms, gathered some produce and set out on a dessert experiment. Far away from professional chefs mastering new pastry techniques in Paris, they took a mad scientist approach, tossing in some sugar, eggs, and milk and seeing how the concoction would bake in their home hearth. To make Clafoutis, first gather your ingredients. You’ll need 3 cups of pitted and halved sweet cherries; 1/2 cup of bittersweet chocolate; 3/4 cup of all purpose flour; 6 tbps of granulated sugar; 1 tbsp of vanilla; and 1 1/4 cup of whole milk (or half and half if you’re a glutton). If you’re feeling saucey, you can add 2 tbps of kafir or bourbon, or…set aside 6 cups of cherries and soak half of the cherries in bourbon for two days. Spoon out 2 tbsp of cherry soaked bourbon for the recipe, and save the cherries in a mason jar to use in cocktails later. Use the remaining 3 cups of cherries (not soaked) for the clafoutis. To make the batter, combine the liquid ingredients in a blender or stand mixer. Beat the eggs, add the milk, the vanilla, and the bourbon/kafir (if you choose). Add the sugar slowly and follow it up with the flour (adding 1/4 c. at a time).  Once all the ingredients are incorporated, set the batter aside.

Butter the skillet with 1 tbsp of unsalted butter. Place the cherries into the skillet and top with the chocolate. Slowly, pour the batter over the cherries/chocolate making sure to leave 1/2 ” of room at the top so that the clafoutis can rise in the oven. Place into the oven at 425 F for 30 minutes. Remove, dust with powdered sugar and serve! If any of this was confusing, you can watch me make it on youtube as a reference!