So I have to give Gabrielle Hamilton credit.  From smoking toddler, to NY Times Best Selling author and restaurateur, this woman has taken life by the balls, turned it around, and made it work. Sometime between dropping out of NYU, turning tables at Danceteria, and traveling like a hobo around Europe on $2.00 she became a master of personal branding and hype. 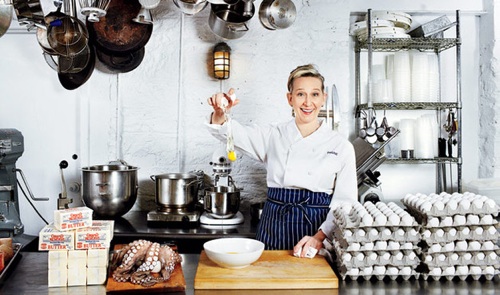 we love it when you smile at us GH!

The master part is no joke. If you haven’t heard, Gabrielle Hamilton is the newest hyped- up celebrity chef from the East Village. Hale and Hearty Soup has even allowed her to guest sou(p) chef for them this week and everyone is talking about Prune as if it is the newest restaurant on the block (it’s been around since 1999). PRUNE the cookbook has recently been crowned a New York Times Best Seller, and you can hear Gabrielle tell you her life story on Audible.

My respect for the woman runs deep. She is an adventurer, food explorer, and entrepreneur. Her manti recipe (soon to be on the blog) will make you want to do a beef broth-with-cayenne butter-keg stand and never come down. Yum. 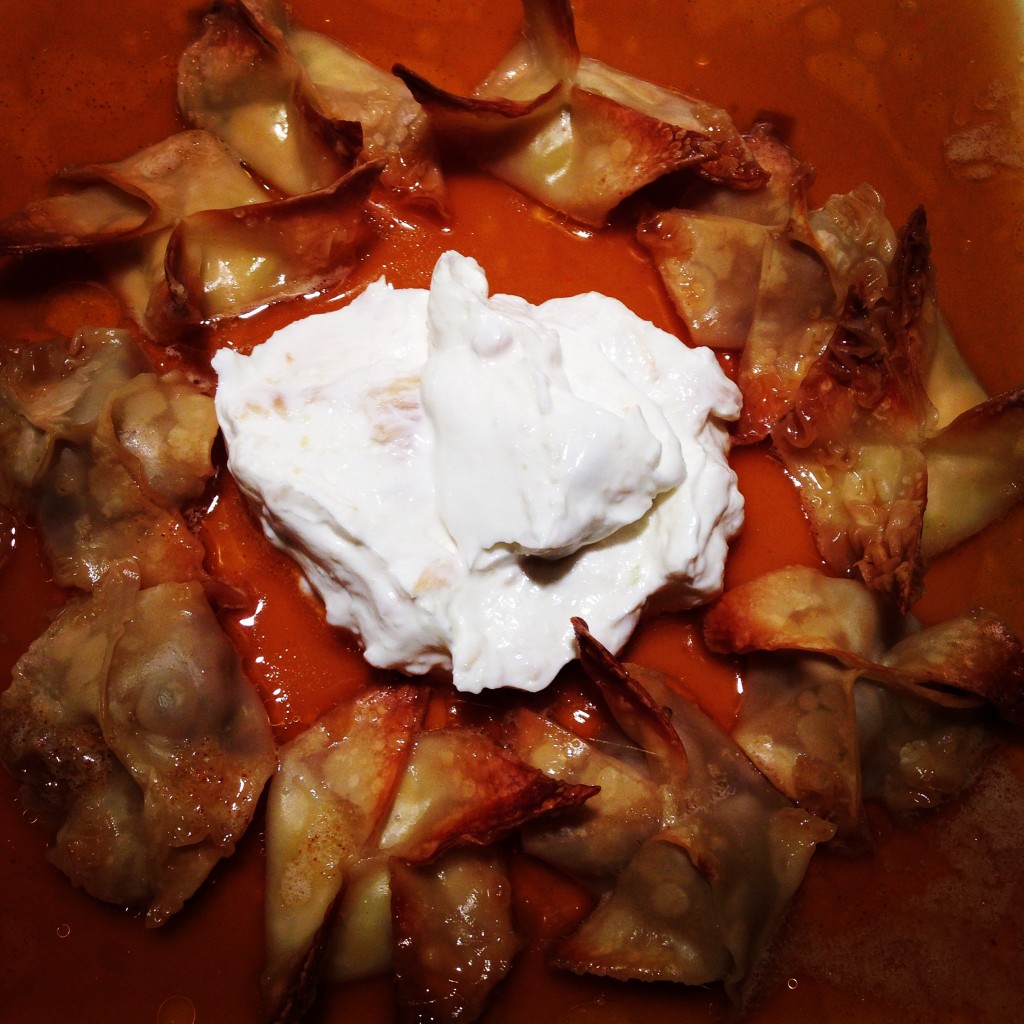 Most importantly, in reading her books, I’ve come to believe that Gabrielle Hamilton understands how people can connect with food deeply; how the way you are served, and the environment you eat in, can instantly bring you back to a place or time in your life, and how great chefs can connect hunger to memory and joy. 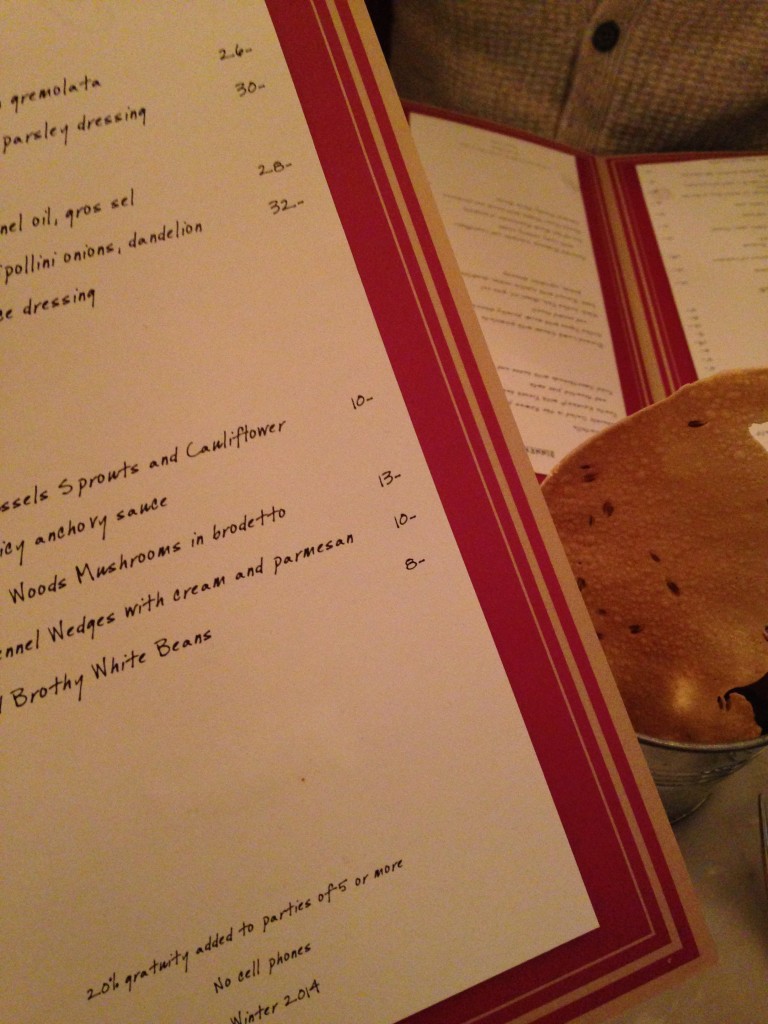 But, I must have been having amnesia on Saturday.  I wasn’t feeling it. It might have been because I sat next to three bottle blonds who spent a good 20 minutes talking about face cream, but the restaurant seemed like an old-standard and not a labor of love.  The lamb sausage was excellent (perfectly formed and wrapped in caul fat), and the smokey white beans I could have eaten forever. The gruff waitress, the poorly priced wine list, and the hard to eat rabbit special were a disappointment. But the big GH smiled at me, so all is forgiven! 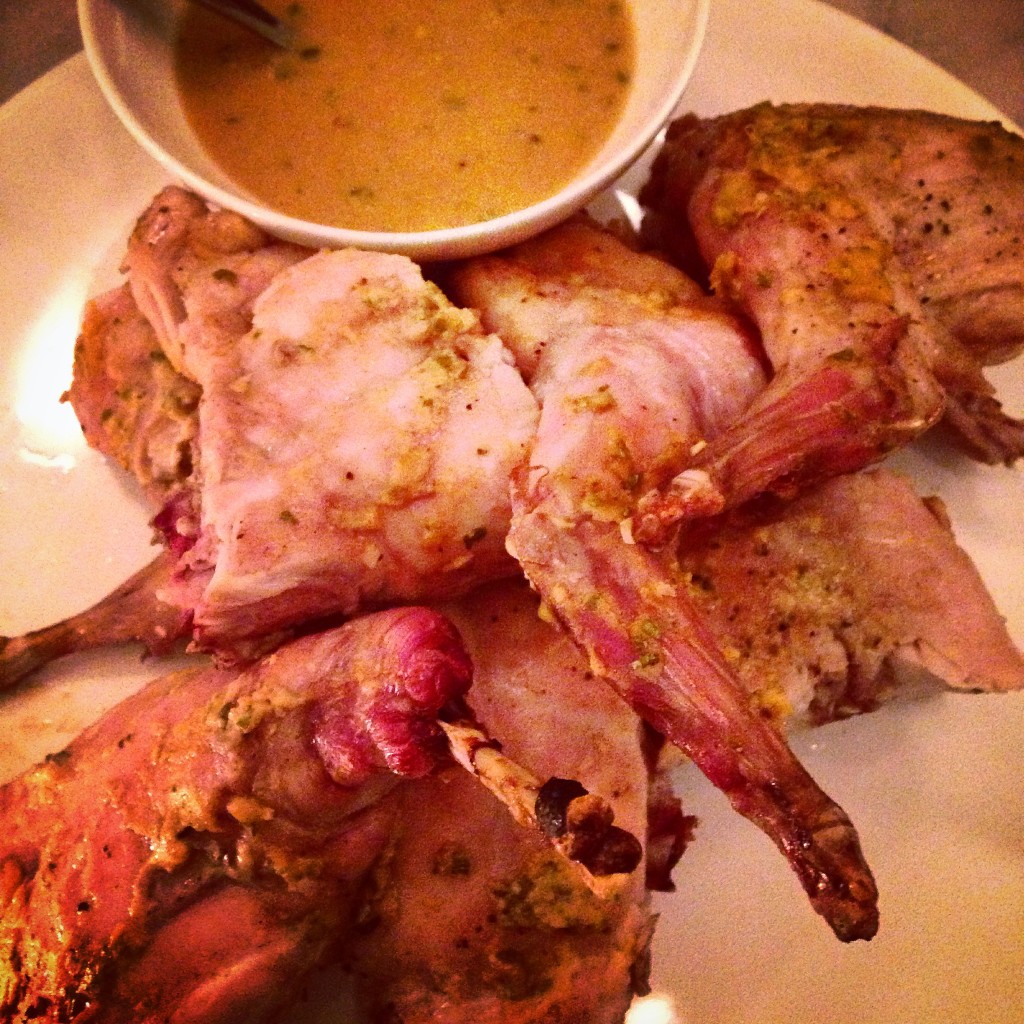 I was so excited to go to Prune on Saturday, I went on a hunt for Hamiltonian inspired recipes to make in advance of the trip. I decided on a variation of Gabby’s banana bread, which I’ve modified by adding vanilla, some spice, and by incorporating whipped cream into the batter. 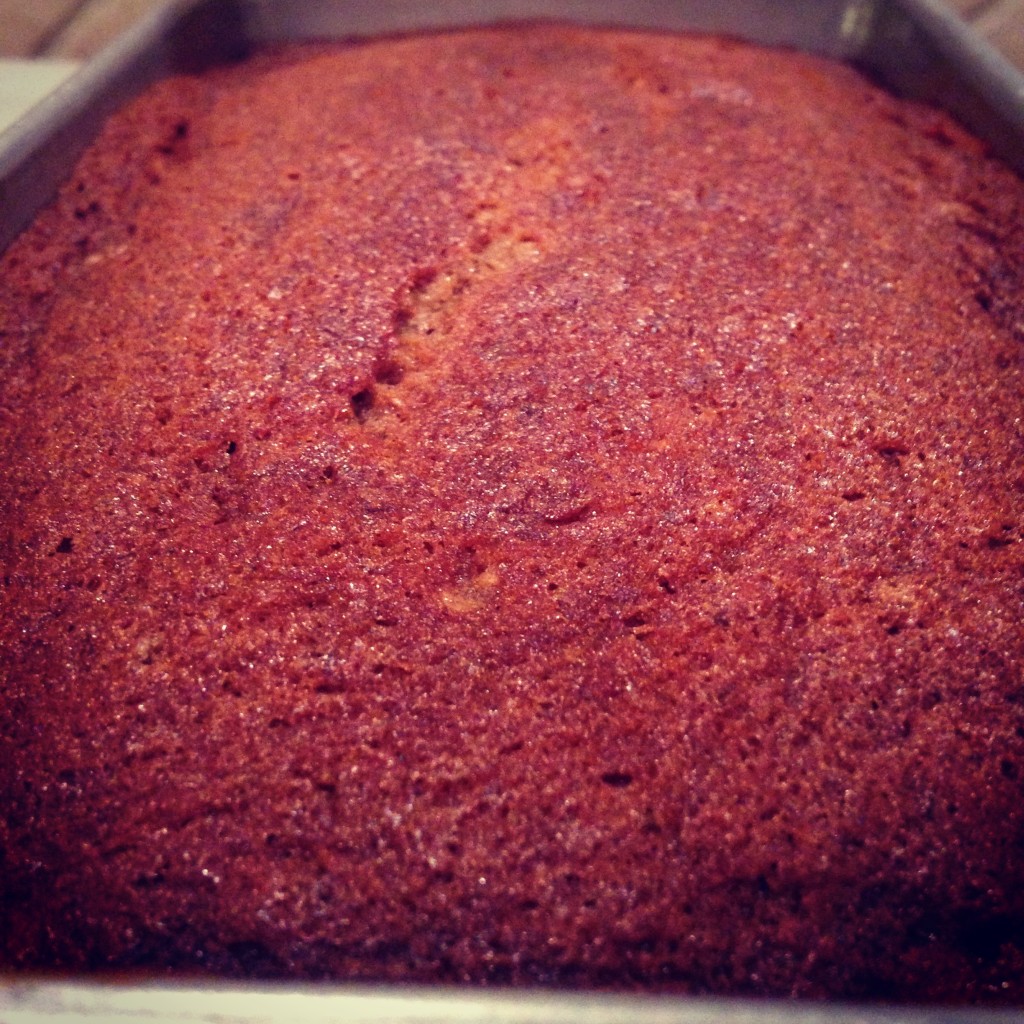 This is the most delicious banana bread in the world.Yes. In. The. WORLD. I know because I made four different loaves three different ways and did a scientific taste test by eating all four loaves;)  The butter content is high, which makes all of the variations rich, but the winning combination used cake flour instead of all purpose flour and folded in whipped cream into the batter. Unfortunately, the whipped cream versions caved slightly on top, but the loaves were much lighter and oh so fluffy. I used overripe (almost black) bananas, sifted the flour before mixing, creamed the butter and sugar, and tried every trick I could think of to maximize deliciousness. It worked. To make this banana bread, first set out all of your ingredients for your mise en place or “ma place” as my mother likes to call it. To make two loaves of banana bread, you’ll need 1 lb of cold butter (4 sticks); 2 cups granulated sugar; 4 eggs; 1 tbsp of vanilla; 1 1/2 tsp of cloves; 2 tsp of cinnamon; 1/2 tsp of nutmeg; 1 tsp of salt; 1 tbsp baking soda; 2 cups of cake flour; 1 cup of heavy cream; and 2 cups of overripe bananas (about 4). I’m allergic to nuts, but if you’re not, you can also add 1/4 cup to 1/2 cup of walnuts for some added crunch. As you can see, one of the first things I’ve done is mash the bananas and set them aside. You can do this any way you choose. Throw them against the wall, slam a book down on top, run them over with your kids’ hot wheels etc. To avoid making a mess, I wrap them in plastic wrap and smash them with my hands. Bam! 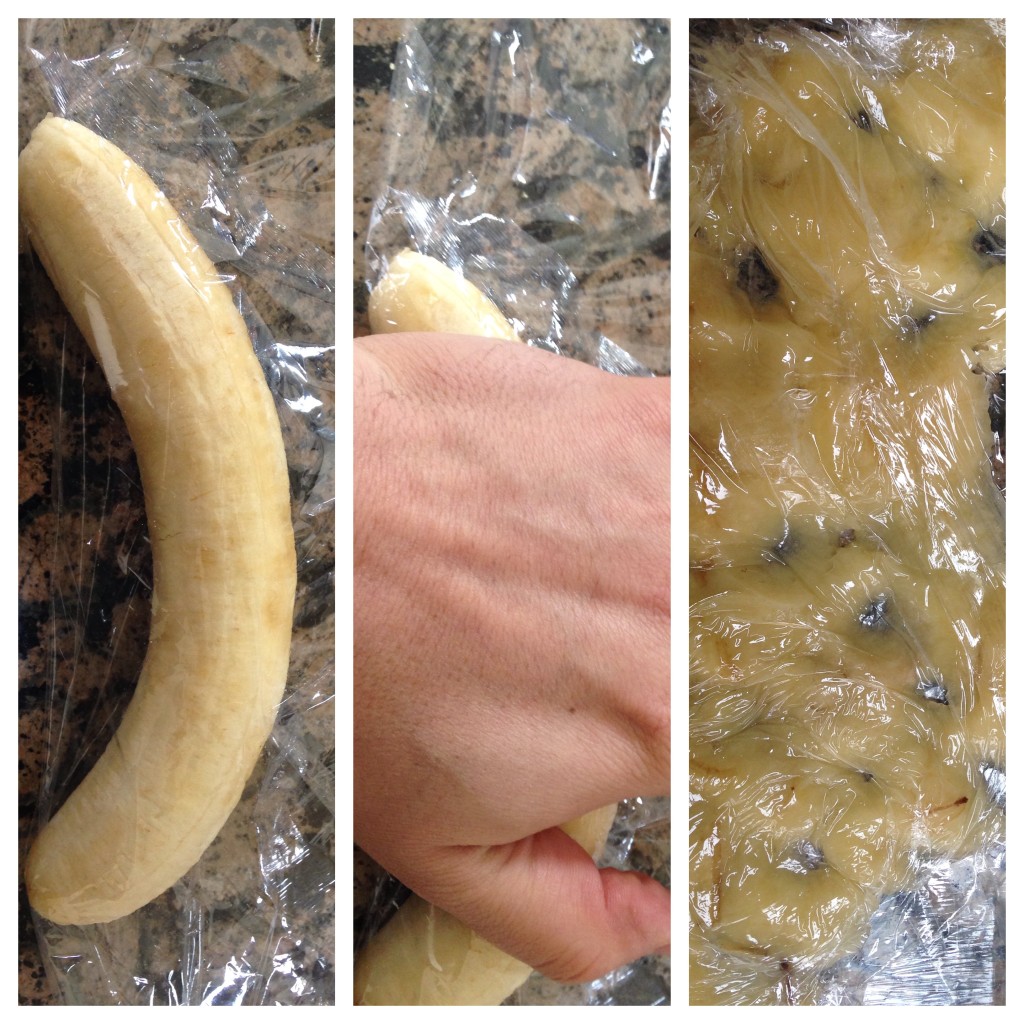 You can keep the mashed banana wrapped in the plastic wrap or just scrape it out into a bowl to use later.

Now, this is a bit tedious, but it makes a difference: Take a fork and fluff up your flour. Then re-measure it. It should measure slightly more than you thought you had. Take a measuring cup and measure out 2 cups of the fluffed up flour and discard the rest or place back into your flour bag.  Now sift all of the dry ingredients together and set aside.

With your mixer set on medium-high, cream your butter until it becomes very fluffy and light in color. This can take a bit of time (5 minutes or so). Shut off the mixer periodically, and scrape the butter down  from the sides before starting the mixer again (you’ll want to do this before adding the sugar, mid way through the sugar mixing, and before each egg is added). Add your sugar and continue until the sugar seems to dissolve into the butter and the mixture is again light and fluffy–almost like whipped cream. 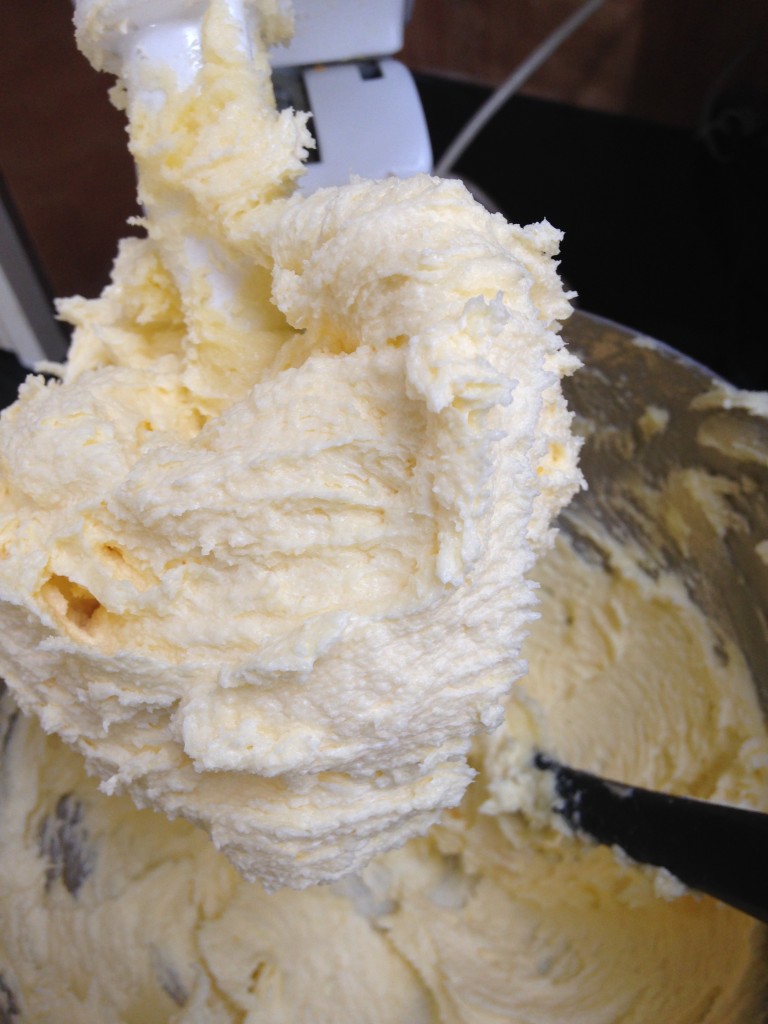 Now add each egg one at a time mixing until fully incorporated after each egg is added. Upon adding the egg, the batter may look like it’s curdling. It’s not. Just speed up the mixer slightly and the egg will full mix in. Stop the mixer and scrape the sides again and then add in the next egg. Do this until all eggs are fully mixed in.

Now, the next part is debatable. In my opinion, you can go ahead and slowly add in all of the flour until it’s fully incorporated. Then you can add in all of the bananas and mix again until incorporated. Finally, whip up 1 cup of cream and, in batches, carefully fold (with a spatula NOT with the mixer) the whipped cream into the batter. 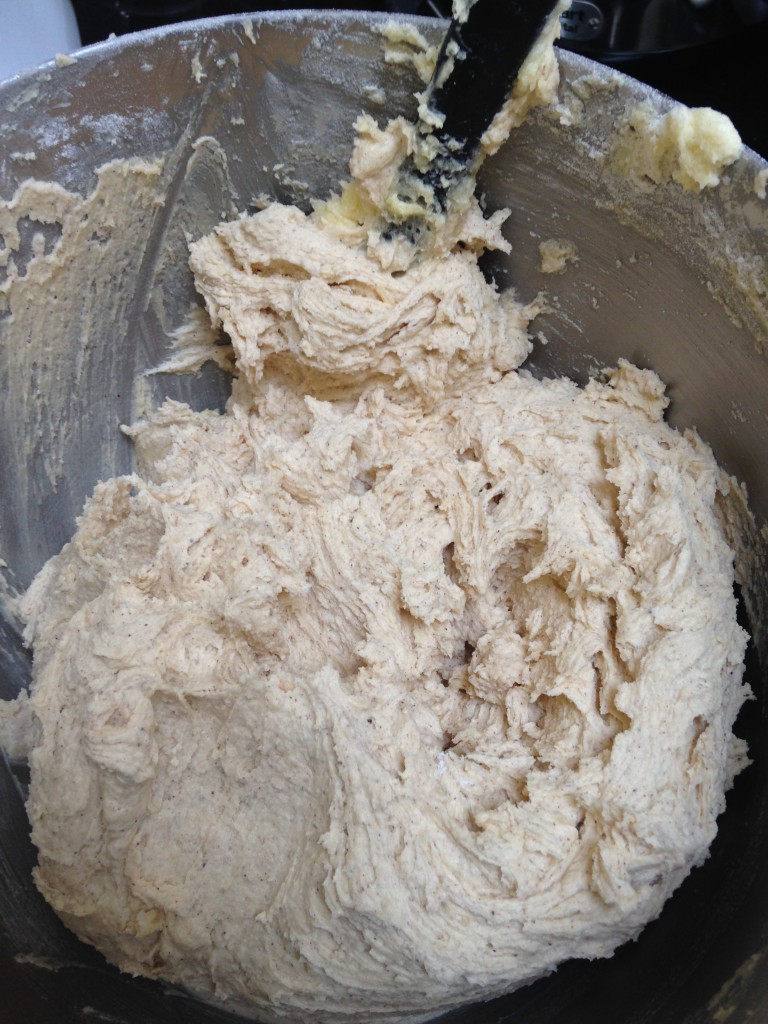 As an alternative, I tried mixing in 1/3 of the flour, then 1/3 of the bananas and 1/3 of the cream and then another 1/3 of the flour and so on. Waste of time. I didn’t notice any difference. As long as the ingredients are fully incorporated and your batter is still light and fluffy, you should be good to go. 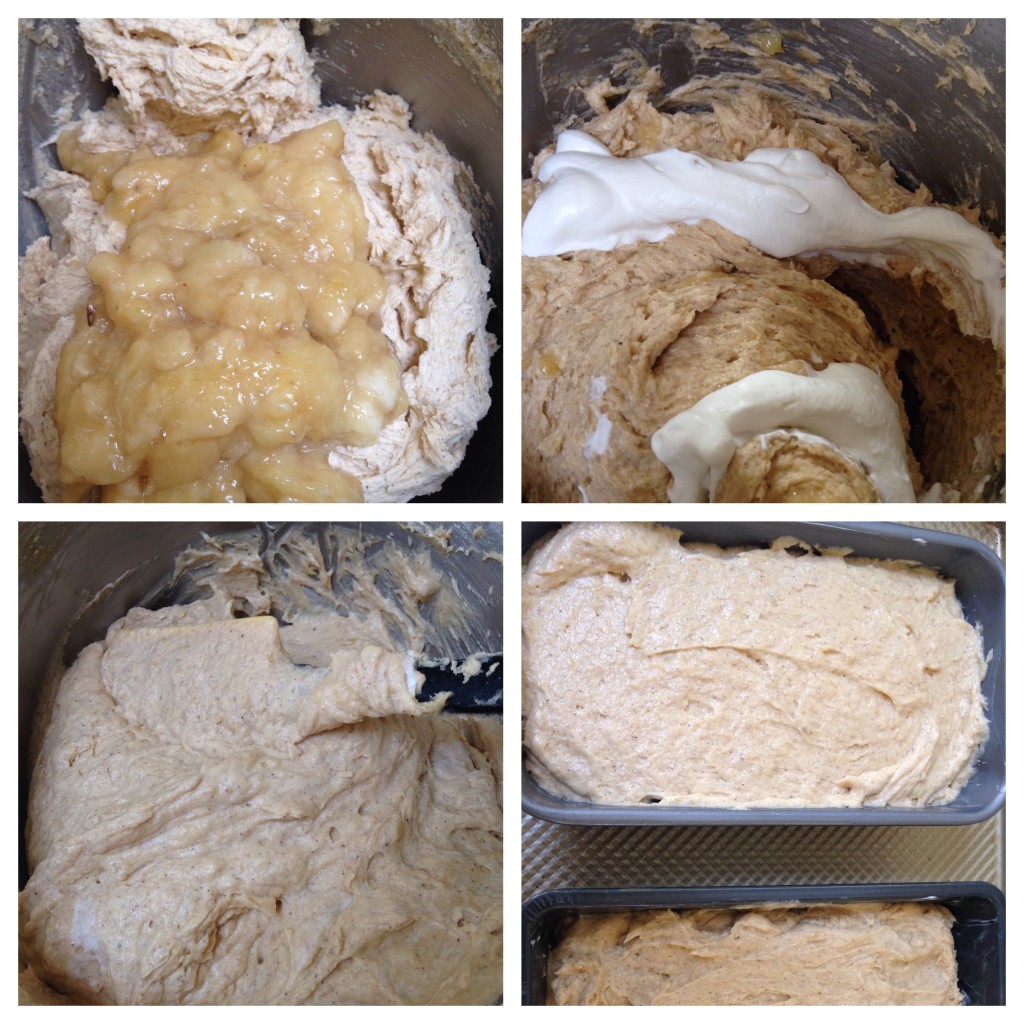 Once all the ingredients are full incorporated, grease up two loaf pans with butter. I used pans that measure about 9”x 5.5 ” by 3”

Pop the pans into the oven and let them bake for 90 minutes. Check on them an hour in and cover with aluminum foil for the last 30 minutes. If you’re concerned about over-baking you can pull them out a tad early and stick a tooth pick into the middle of the loaf. When it comes out clean, you’re done. If it comes out with batter on it, pop it back in. 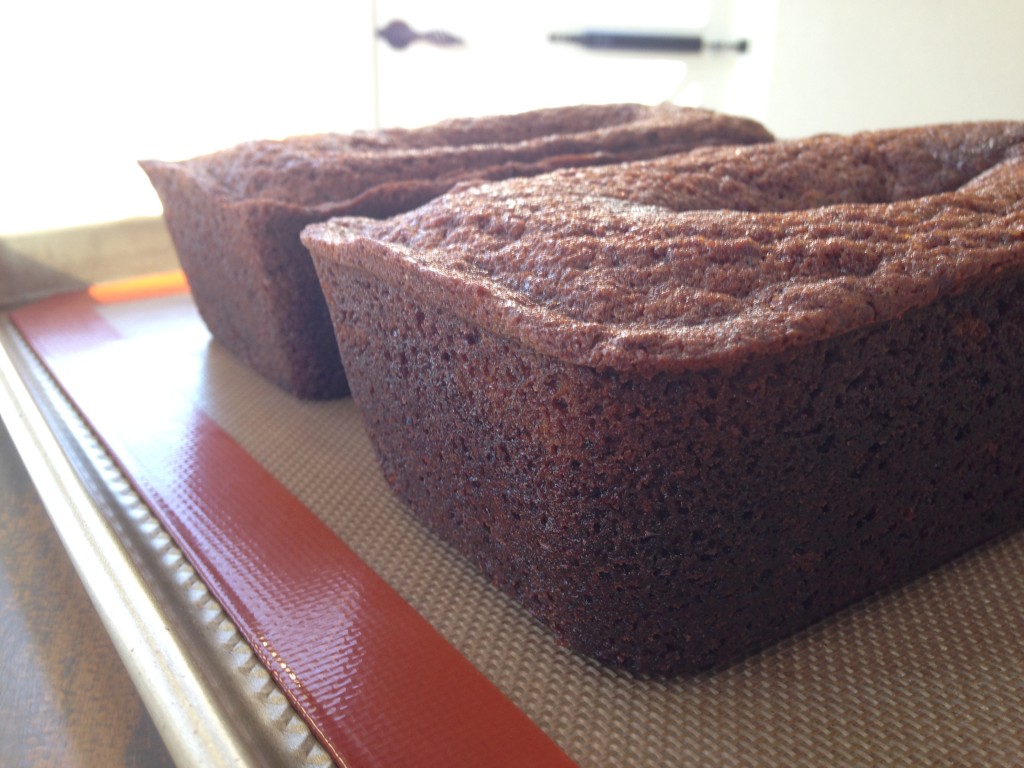 Allow the loaves to cool for at least an hour if not over night. If you can resist eating them for a full day, even better. Banana bread tastes so much better a day or two in. 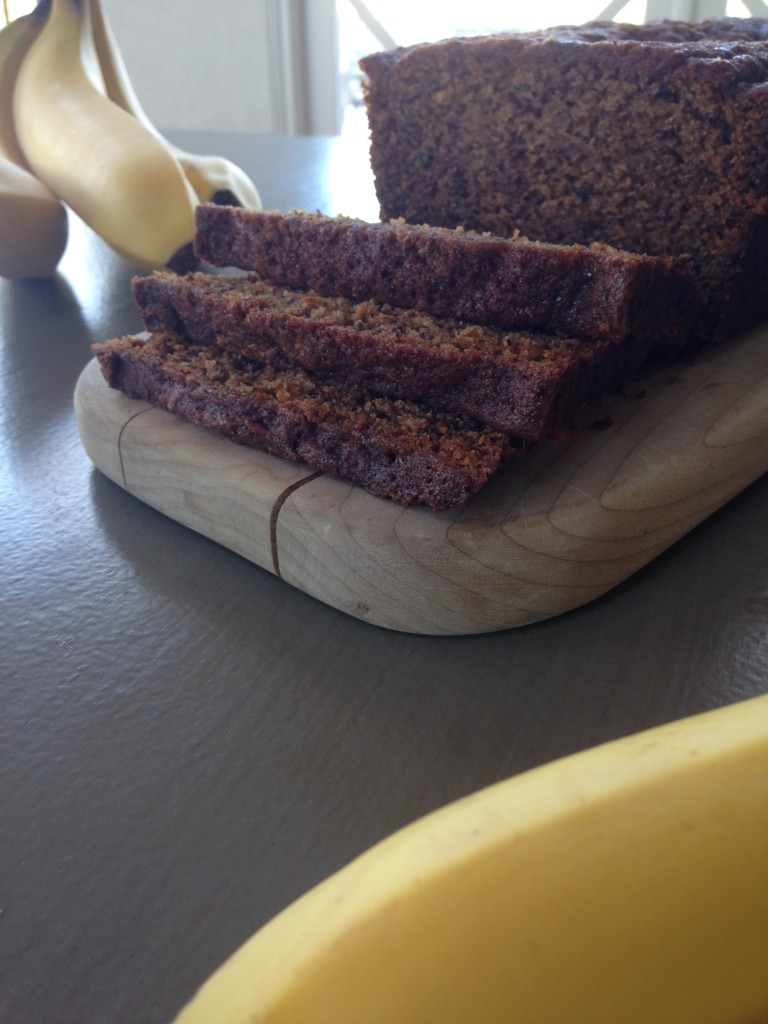 Next time, I’m tempted to soak the bananas in bourbon or rum, or transform the banana bread into banana layer cake with a delicious marscapone cream icing. My inner fat boy just can’t stop!

Until then, enjoy this version. Great for dessert or breakfast any day of the week.:) 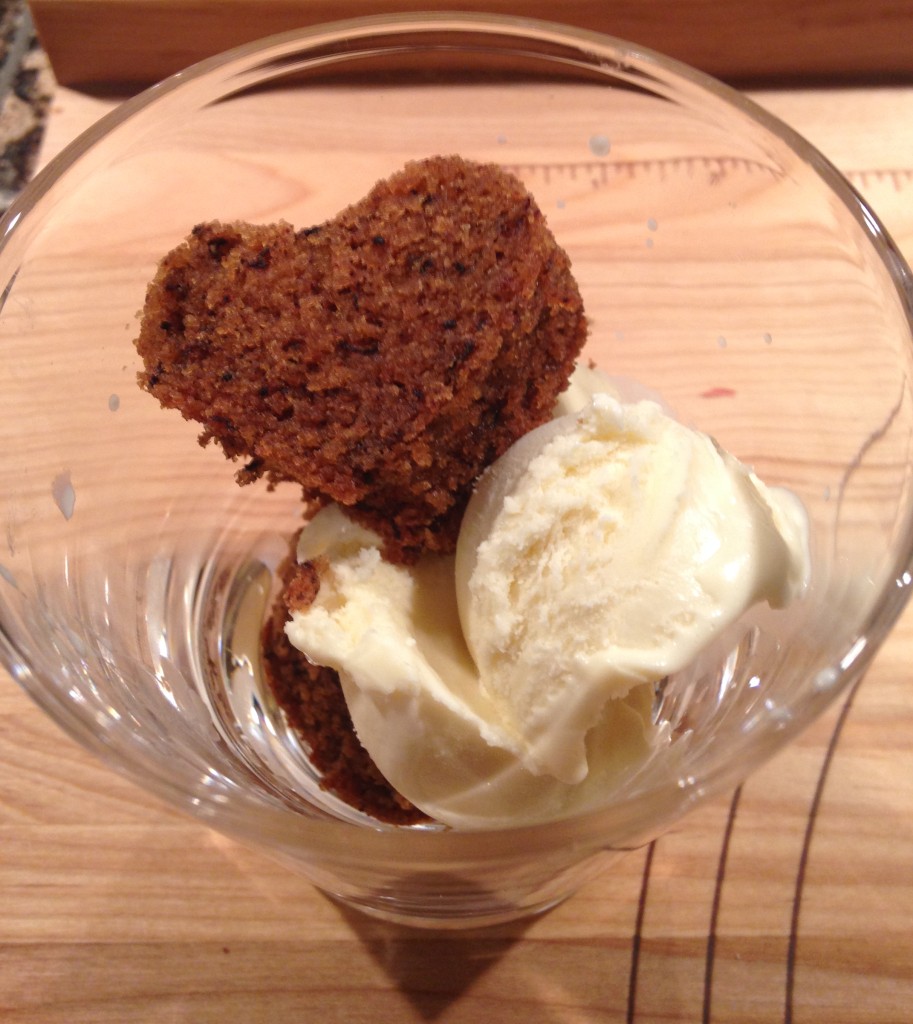 Prune & BananaBread. What? What? 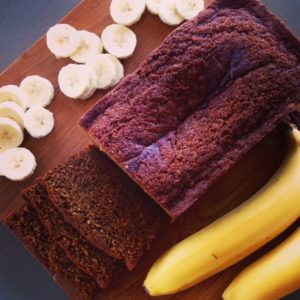