I spent a good hour on the elliptical today making up for chowing down on this decadent brunch-time meal. French toast alone would have created some guilt. Brioche french toast would probably have put gym time on my calendar for today or tomorrow. Brioche french toast stuffed with meyer lemon marscapone cream and freshly made plum syrup? This was a gym emergency. 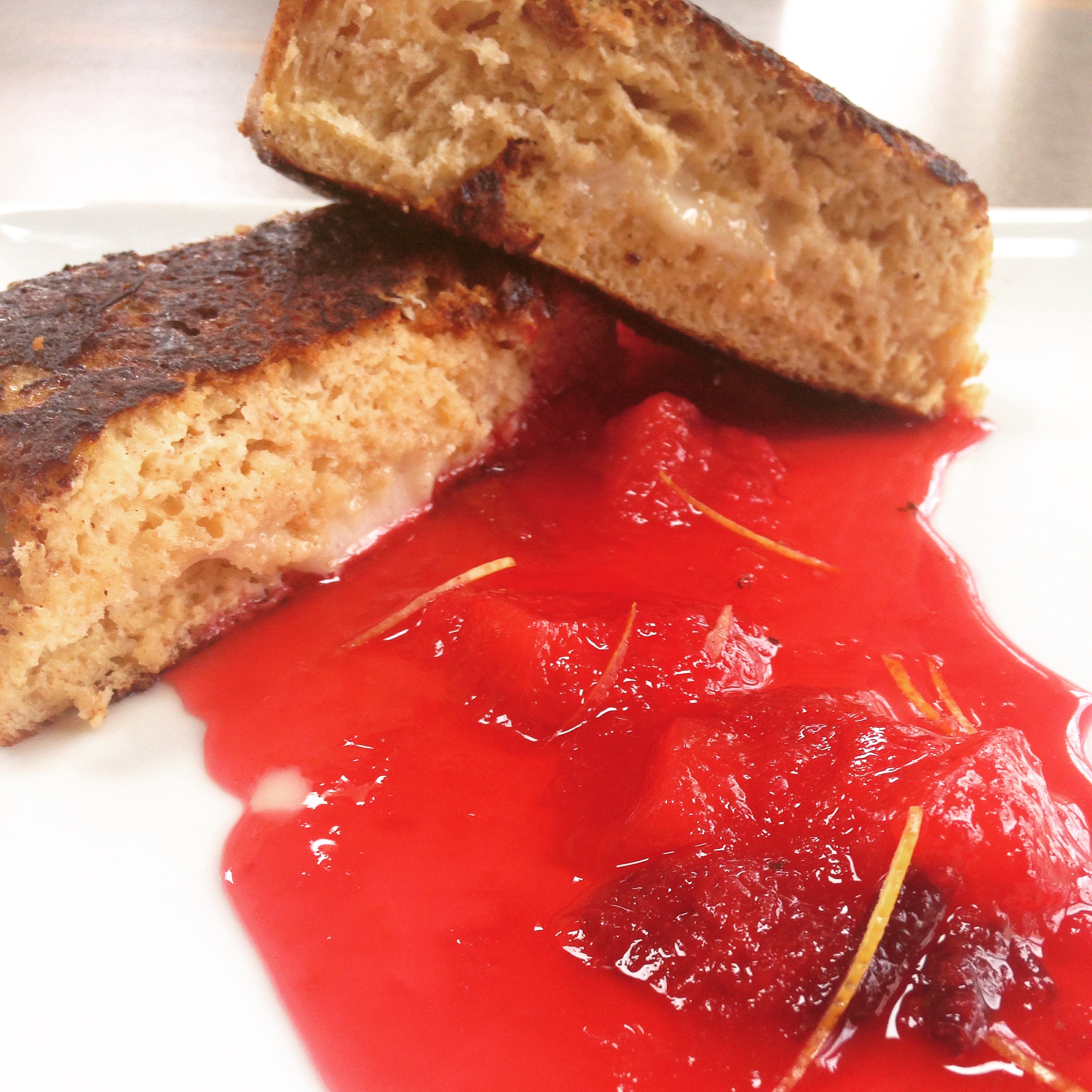 Luckily, I used the leftover brioche buns that I made a few days earlier. These buns were wholewheat, so I feel a tad better about myself. Phew…Needless to say, this was/is the absolute best use of leftovers I can think of. 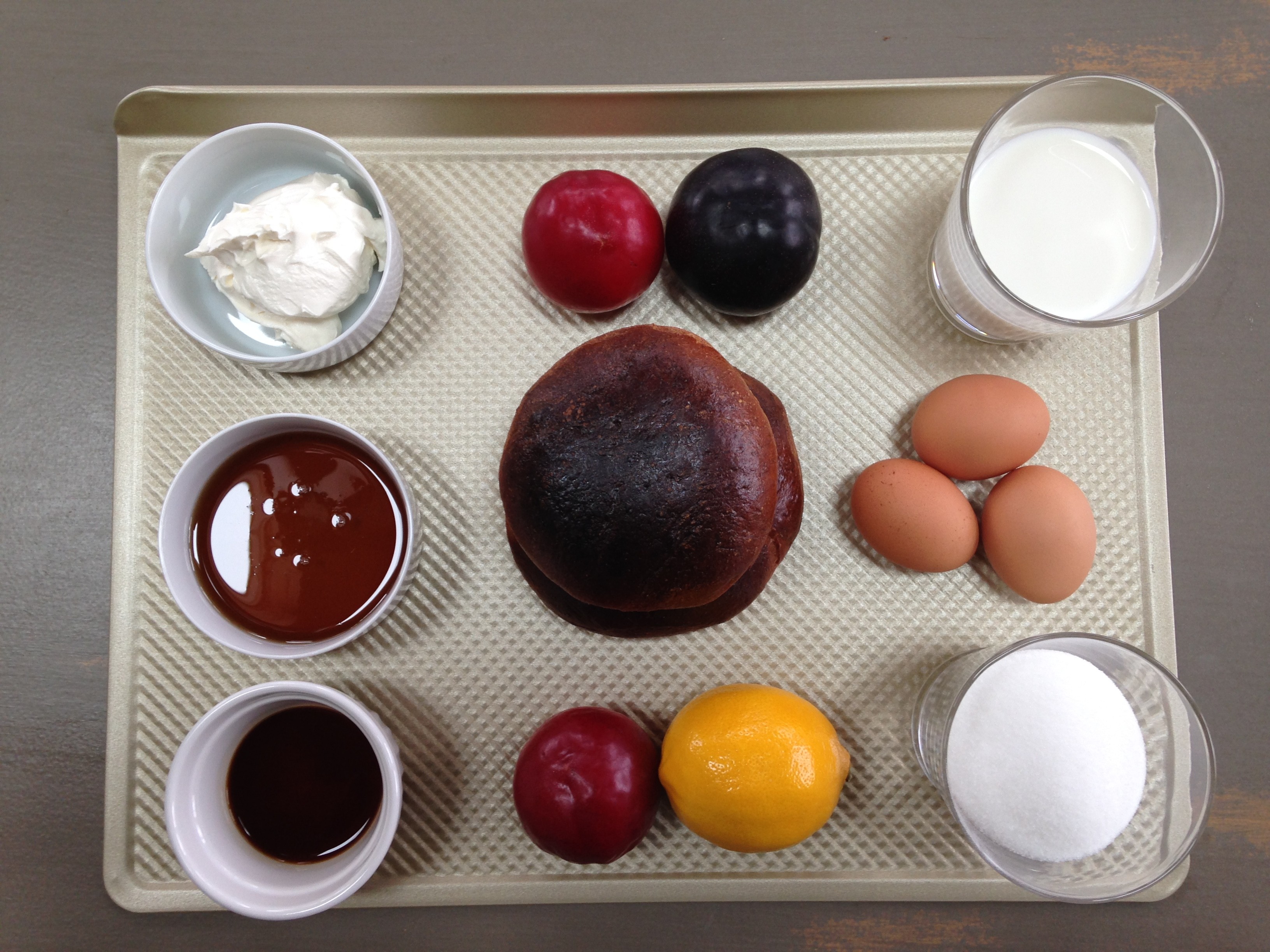 To make this delicious french toast, you’ll need fewer ingredients than you would imagine. Gather them all together and place them on your ingredients tray. 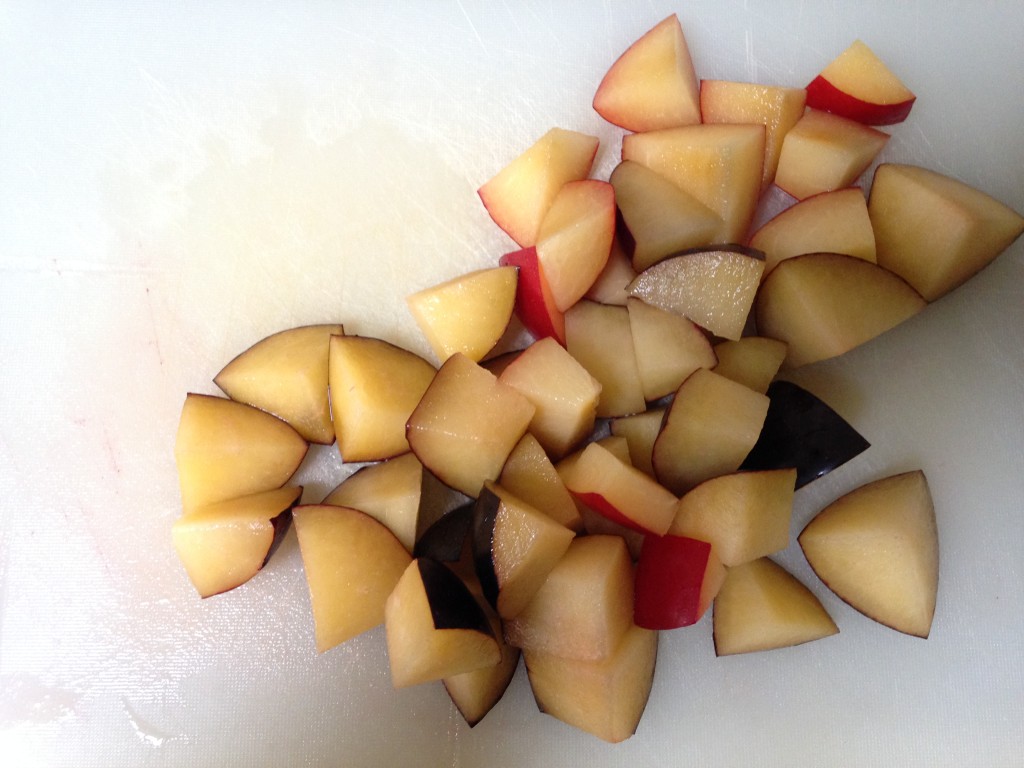 Chop 3-4 plums and place them into a small pot on medium heat. Add a 1/4 cup of water. With a carrot pealer, peal one thick strip (about 3 inches in length) off of your meyer lemon and add it to the plums. As the plums heat up, you will see small bubbles forming in the bottom of the pot. Add the maple syrup to the plums and bring the plum mixture to a boil, stirring the plums often so that they don’t burn at the bottom of the pot. Reduce the heat to low-medium and let mixture reduce while you work on the french toast and marscapone cream. The skins will fall off of the plums and the mixture will turn a bright pinkish red. Stir the pot occassionally as you work on preparing the rest of the brunch. 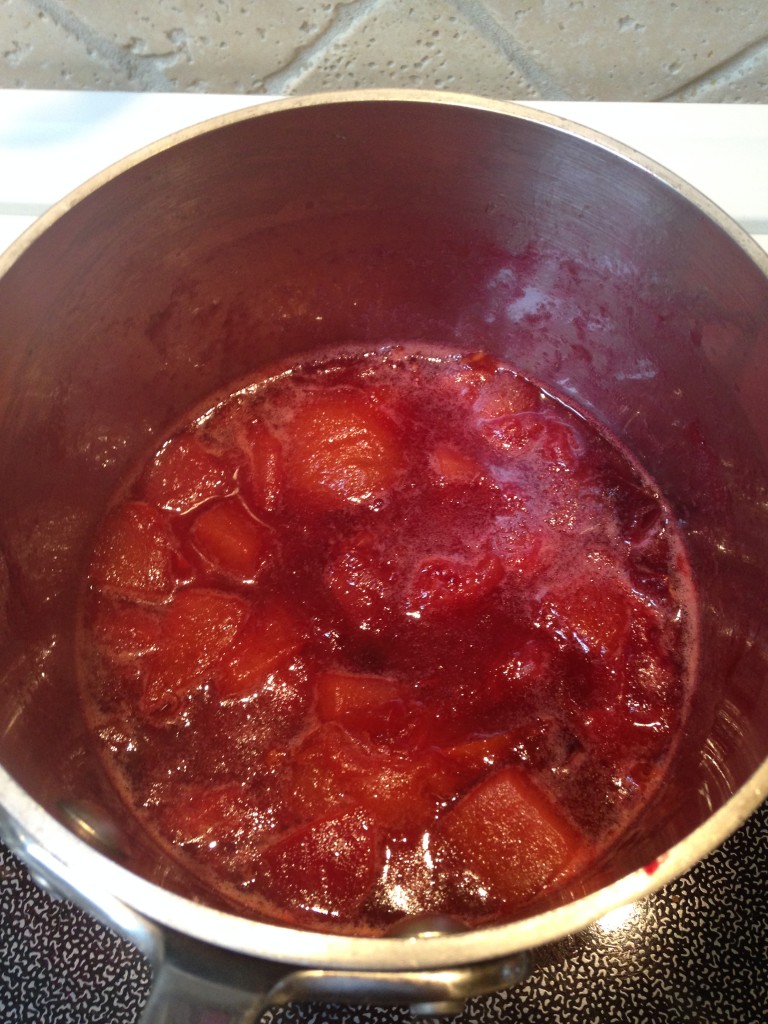 To make the marscapone cream, toss 1/2 cup of sugar with 1/2 cup of marscapone cheese into a medium sized mixing bowl. Squeeze half of the meyer lemon into the bowl and mix the ingredients together. If you taste the mixture, you will be able to feel the granulated sugar in the mixture. Let it sit for a few minutes and the sugar crystals will dissolve leaving the cream nice and smooth. 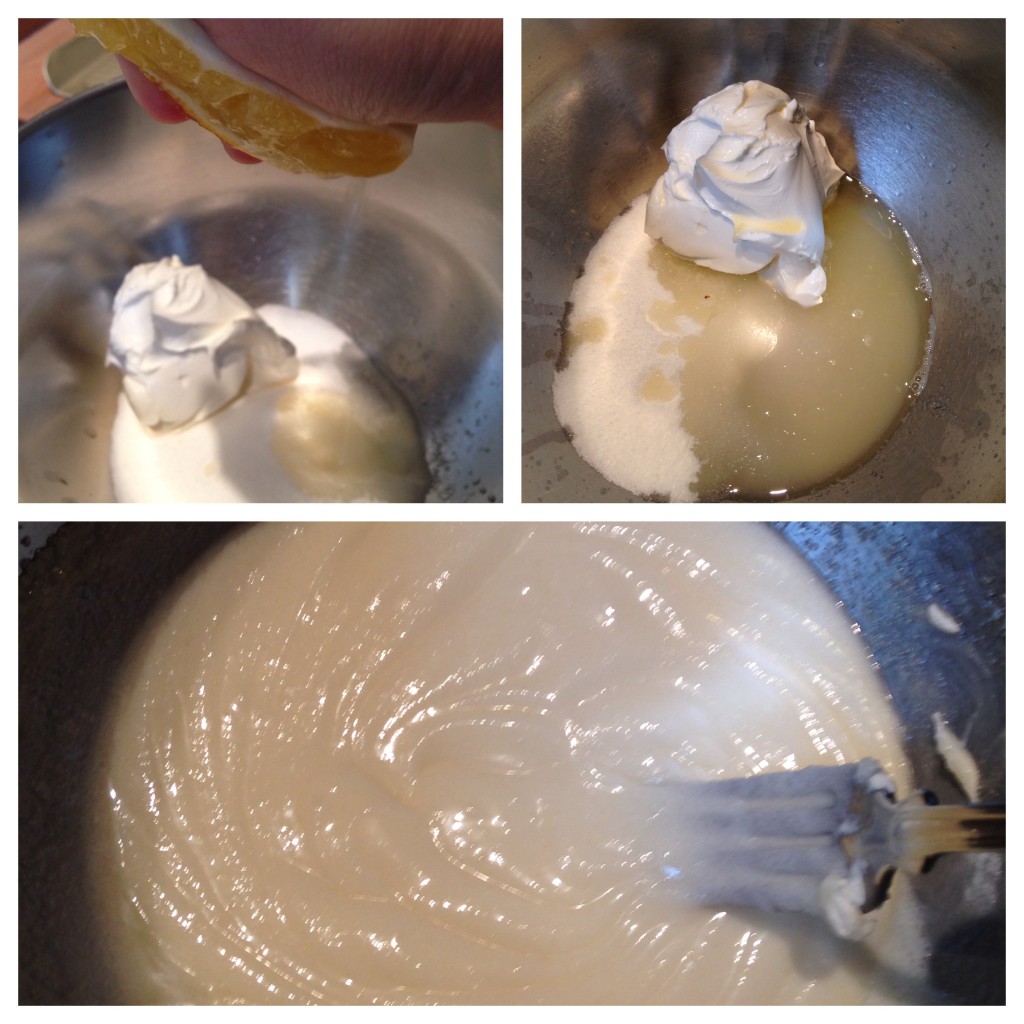 Don’t forget to stir your plums! To make the french toast, first you’ll need to prepare the egg bath. Beat together 1 1/2 cup of milk, 2 tbsp of vanilla, 3 eggs, 1/2 tsp of salt and 1/2 tsp of cinammon in a large mixing bowl. Before placing the bread into the egg bath, delicately slice the shiny brown tops off of the brioche. Slice a hole in the top of the bun so that you can fill the bun up with cream. Be careful not to cut all the way through to the bottom. Stick your fingers in the hole, and attempt to widen the bottom by pushing outward from the inside. Make sure to hold the outside of the bun while you push so that the bread becomes compressed. You don’t want to push a hole in the bun! 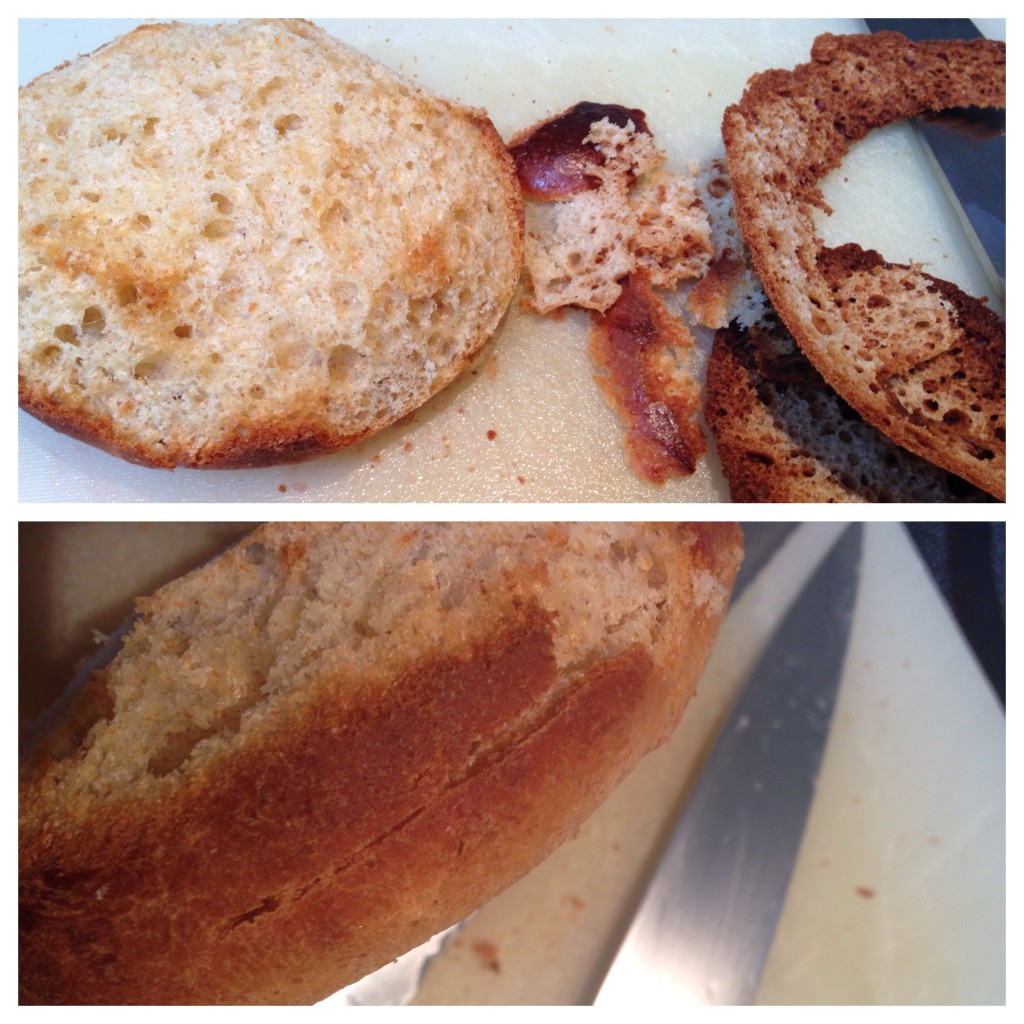 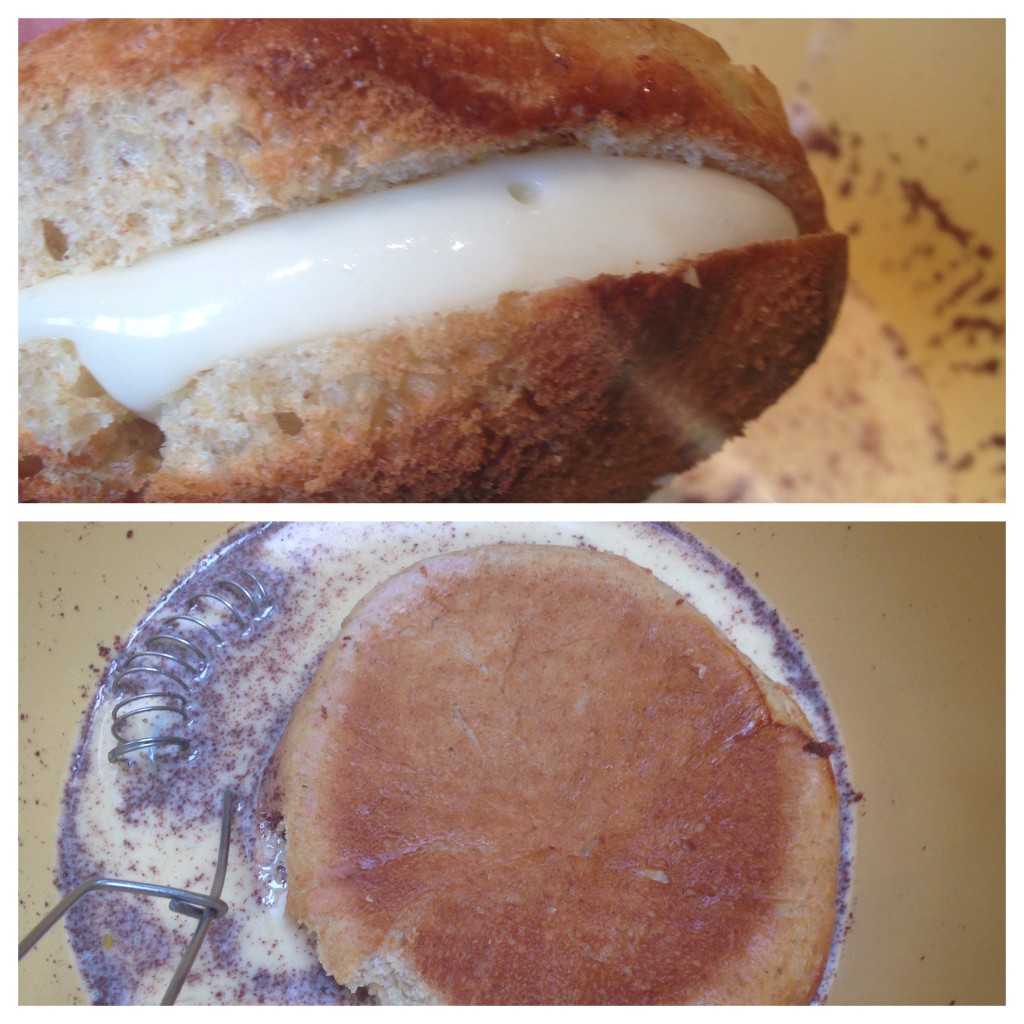 Grease a medium sized frying pan on medium heat (I used Pam) and place the bun onto the pan. Cook the bun 3-4 minutes on each side. Remove from the heat, slice in half and serve along with the now-reduced plum syrup. If you are making multiple pieces, you can place these buns in the oven to keep them warm.

Enjoy this brunch while you eat it slowly! It disappears faster than you’d ever like;)