When Baby wasn’t carrying that watermelon, she was probably locked in her room eating borscht like a good jewish girl.  It’s most probable-or at least maybe possible?–that while her parents were at “entertainment night,” she stayed back with Jane Eyre and a bowl full of beet soup. It may have just been the cliche that threw her over the edge–borscht in the borschtbelt–and sent her off thrusting about with her obviously non-jewish dance instructor. Naughty girl. 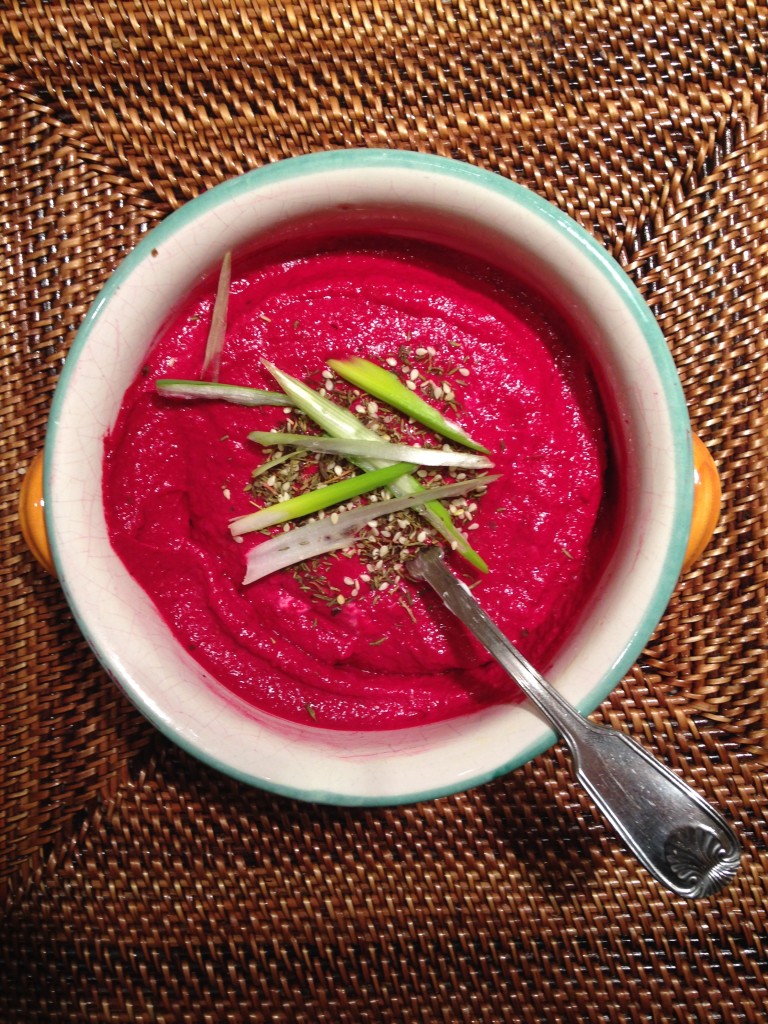 Poor Baby. If she were, in fact, eating borscht, it was likely the bland kind–the kind full of celery and cabbage that came over with my relatives on a steam boat at the turn of the twentieth century and should probably have been sent back soon thereafter. Had she just been a little more adventurous in the kitchen–and a little less in the back rooms of Kellerman’s–she could have tried this amazingly creamy puree I dined on last night and avoided getting into so much trouble with Patrick Swayze. 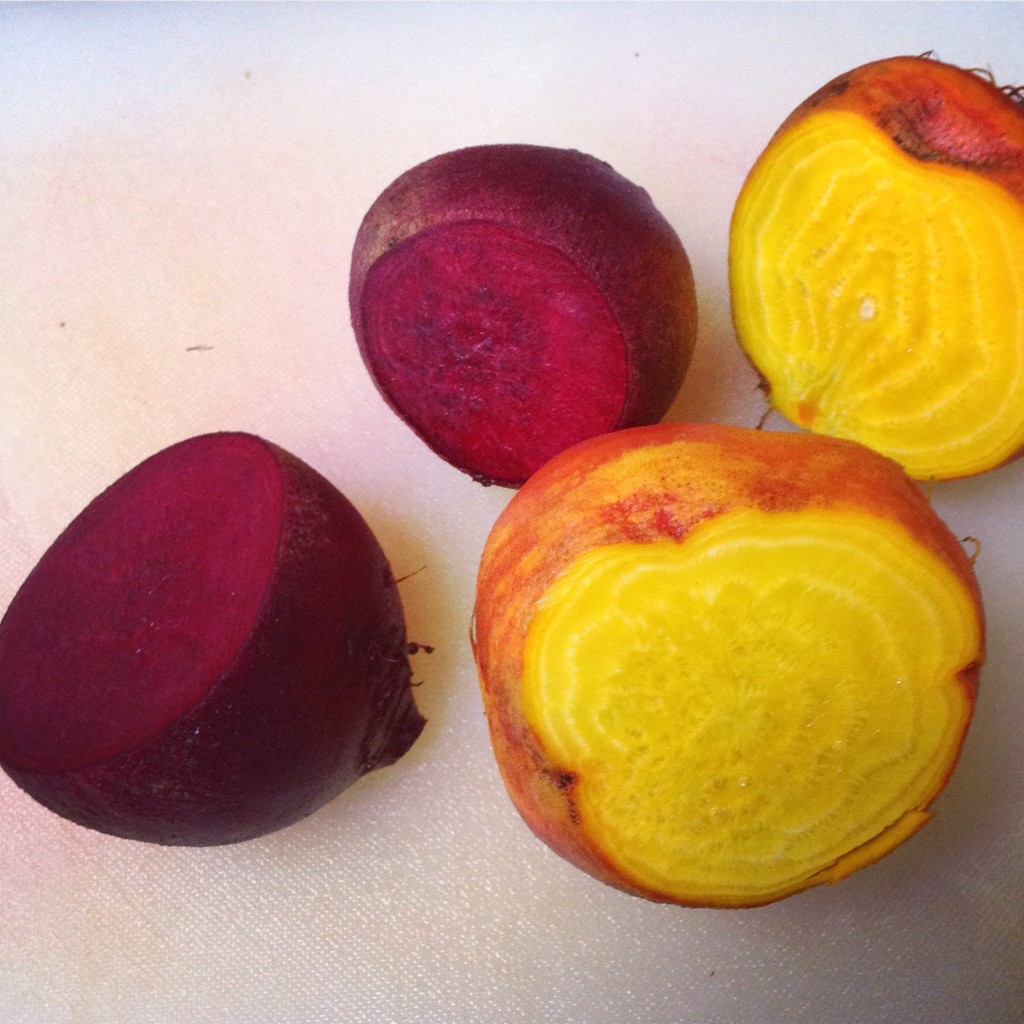 Beets have become all the rage over the past few years. First came beets with goat cheese as toppings in salads, then salads composed entirely of beets. Sometimes the most daring of chefs will position multi-colored beets or purple beets mixed with yellow-orange beets over a bed of micro-greens. Sometimes they’ll even shave the beets and call it beet carpaccio! Clever.Veeeery clever… Rarely, however, do you hear of beets taking center stage.  Last night, I went back to my…ahem…roots to push the beet-envelope. I made a middle-eastern inspired borscht with figs, sweet potatoes, za’atar spice, garlic, and greek yogurt–an A+. Here’s how I did it…

This recipe is inspired by and adapted from Jerusalem, a cookbook by Yotam Ottolenghi and Sami Tamimi. The book focuses on the food of Jerusalem bringing together food rooted in Palestinian and Israeli traditions. The book also reinvents some old-world, eastern european jewish dishes, giving them a middle eastern flair.  The cookbook mixes meats with figs and dates, spikes otherwise bland meals with cinammon and chili peppers, and soothes with healthy dollops of yogurt on almost everything. I could eat out of this cookbook for the rest of my life and be very happy. 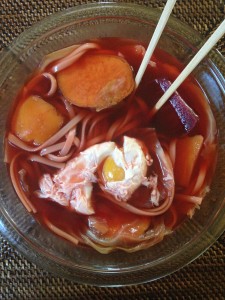 Given that it’s nearly the middle of winter and root vegetables are in season, I’ve been experimenting with ways to use beets. I made beet soup the other day with a poached egg and udon noodles, which was also quite good. The creaminess from the poached egg and the heartiness of the udon noodles almost balanced the thinness of the soup. Almost. After last night, however,  I’m convinced that when it comes to beet soup, thicker, creamier, and spicier is the way to go.

As you can see from my ingredients tray. This dish is very simple. In the morning when you wake up, drop some dried figs (I used about 1/2 cup) into water and leave them to plump up during the day. At night, when you get home from work, wash 6 or 7 beets and 1 medium-large sweet potatoe. I sugget using all purple beets to get the bright pink/purple color you see in my first picture in this post. When you’re ready, remove the greens, and chop off the tops and part of the long scraggly pointing bottom of the root(see photo above). Lay them top down onto a cookie sheet. Cut the potato into wedges(half the potato and then half the halves). Sprinkle the beets and potato wedges with olive oil, salt, and pepper. Roast them at 475 F for 30-35 minutes.  Making beets, is nice, because you can break up what you’re cooking and prepare in phases. Lately, I’ve been using this time to go for a quick run (I gotta stay fit if I’m gonna learn how to make cake, and cookies, and creme brulee)!

As soon as the beets come out of the oven, dunk them one at a time into a mixing bowl filled with ice water and peel back the outer layer of the beet revealing the bright, soft, interior. The water and your hands will likely turn bright pink, but this will come off with some water and soap if you wash your hands right when you’re done. Take the beets and set them aside (do not place them on a light colored counter top, or you will end up with a pink kitchen…). With a fork or a spatula, separate the potato flesh from the potato skins and set the flesh aside with the beets. Eat the skins if you’re hungry; they’re tasty!

Drain the figs and remove any stems. Place the beets, crushed garlic, figs, and greek yogurt into a food processor and blend until smooth. Continue to add more greek yogurt to taste. 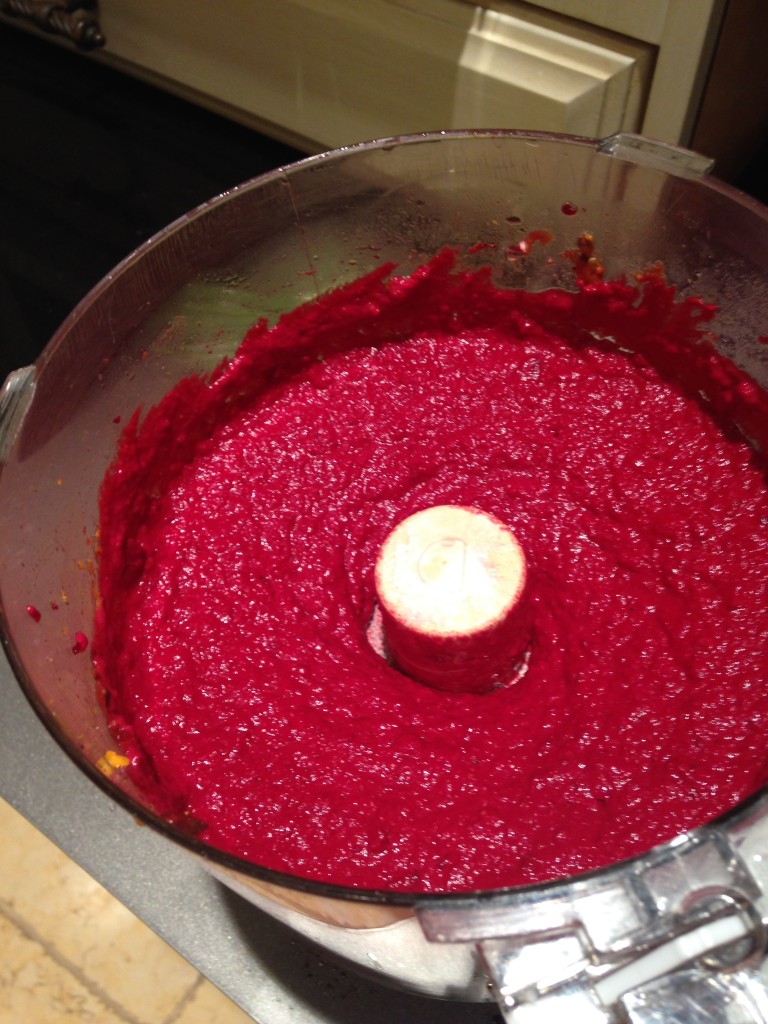