Now that I’m B & T living, I figure there’s little added shame in exploring all the outer-boroughs. This weekend, I rented a car to visit my folks in Maryland and took a detour through Jackson Heights on the way back.

“Halt! Take us to Queens!” –Prince Akim of Zamunda

Arepas, Chirimoya, Supermarkets that sell Pinatas, mannqueins with enormous boobs…Jackson Heights seems to have all the good things Colombia has to offer…without the Zika virus! I made a pit stop for some Colombian food at Pollos Mario on Woodside Avenue (below the 7 train) at around 85th street. Wow. There are 5,000 Colombian restaurants around this neighborhood. Pollos Mario is the classy joint (duh) with the fake orange tree in side that makes loud jungle bird chirping noises while you eat! You balk when I say Queens, but put your snobby away. Apparently Mario is smarter than you are. On Yelp there appear to be at least 5 different Pollos Mario scattered around New York. Score: Enterprising Mario 1; GG 0. sigh. .  .

Pollos Mario is a real fast-casual mecca. You may not get very far if you don’t speak Spanish here, but Mario the genius has brought giant photo menu realness to his restaurant so that even the most timid gringo can find something he might want to experiment with. The portions are ENORMOUS. The empanadas–made with a fried corn meal shell–are little umami pockets of well-spiced, crunchy, deliciousness. The Arepa, topped with a billion pounds of cotija-like cheese will leave you obese and, yet, smiley.   To avoid a heart attack, I had the roast chicken, which seemed to be the obvious choice…I admit that the white-devil in me was a little worried about Montezuma’s revenge, but I emerged whole from my weekend immersion. To celebrate stomach bug-free me, I decided to make something inspired by my trip to little Colombia: fresh fish poached in coconut milk with cilantro, onions, and tomatoes. Apparently, coconut milk is not the absolute healthiest thing for you, but this meal is low-calorie, fresh tasting, and easy to make. To make red fish poached in coconut milk, first gather your ingredients. You’ll need: 1 lb of fish (Acadian red fish, tilapia, or any other mild fish will do); 1 onion sliced, 2 cups of cherry tomatoes; the top 1/3 of a bunch of cilantro (about 1 cup, coarsely chopped or not at all!); 6 tbsp of olive oil; 2 cloves of garlic; 1 lemon (juice); 1 tsp ginger powder; 1 can of coconut milk; salt and pepper to taste. This entire dish takes about 1.5 hours to prepare–1 hour to marinate the fish and 30 minutes on the stove(max). To marinate the fish, place the fish into a plastic zip lock bag along with half of the oil, 2 garlic cloves (minced) and the ginger. Place into the fridge and allow to sit for 1-2 hours. When the fish has marinated fully, remove from the plastic bag and set the fish aside. Pour the oil into a sautee pan and heat the oil over medium-high heat until the oil appears thing and runs easily. If the oil smokes, you’ve gone too far. Throw it out, clean the pan and start over.  Once the oil is heated, add the sliced onion and the tomatoes. Sautee together until the onions are slightly softened (but not translucent).  Squish some of the tomatoes in the pan so that the juices can mix with the coconut milk. When the onions are softened, but still well-structured, pour in the coconut milk. Heat the sauce until it starts to simmer. Allow to cook down for 2 minutes or so. When the sauce is very hot (boiling or near it) add the fish 1/2 lb at a time (unless you have a ginormous sautee pan). Cover the fish in the sauce for 2-3 minutes.  Remove and repeat with the remaining 1/2 lb of fish. You can leave the fish whole and plate it over jasmine rice, couscous, alone, or chop the fish up a bit and serve in a bowl like stew. 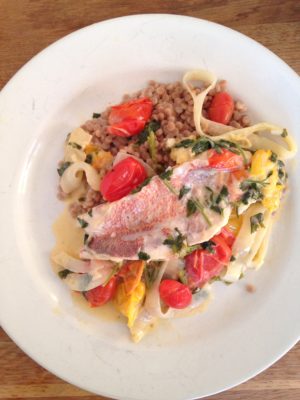