Since I’m basically Ghenghis Kahn’s great great. . . great grandson,  when I saw that Netflix had released a new $90 million period drama about Marco Polo and the Mongolian empire (their response to HBO’s Game of Thrones), I had to watch.

Look into my eyes and say “dramaaaaaaa”

The show is definitely epic. You can easily allow Netflix to consume you in the large, detailed, sets, battle scenes with hundreds of men, and in khazakstan’s expansive and beautiful emptiness that serves as the backdrop for the series.  I gave in quickly. I watched the entire series in about two days, but it is more a testament to my inability to resist a good tv-binge and my attraction to fantasy-kung fu than to the quality of the program, unfortunately. 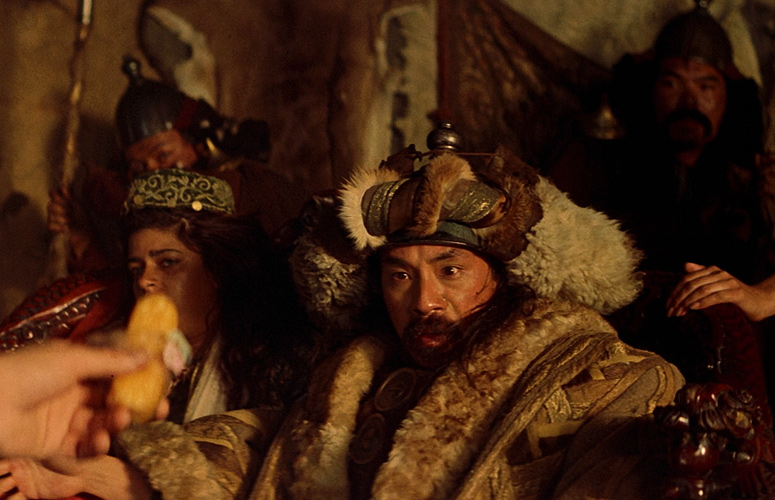 There is so much blood and guts and glory in the story of the great khans of Mongolia who unified nomadic tribes, toppled civilizations, and expanded an empire from the Pacific to the Mediterranean, I wondered why there was a need to shift the focus to Marco Polo at all–who may or may not have played an important role in the Mongolian court.

Strangely, I don’t recall the Netflix directors featuring a great feast in their new series, which is surprising given the stature of the very very prosperous Kublai Khan (played by Benedict Wong). I seem to recall several enjoyable scenes with Robert Baratheon ripping the meat off of a turkey bone and slobbering down some wine. If there were such a feast, I’d like to imagine Kublai would be eating some type of roasted Mongolian BBQ Yak.

You can’t tell me you wouldn’t want to go there. Beautiful!

But that’s highly unlikely. Mongolian beef, Mongolian BBQ, and BBQ itself are not part of native Mongolian cuisine. Womp. Mongolian beef, a sort of beef saute in ginger, garlic, oil, soy sauce, and sugar, is actually native to the US thanks to Chinese immigrants. Here’s how you make it… 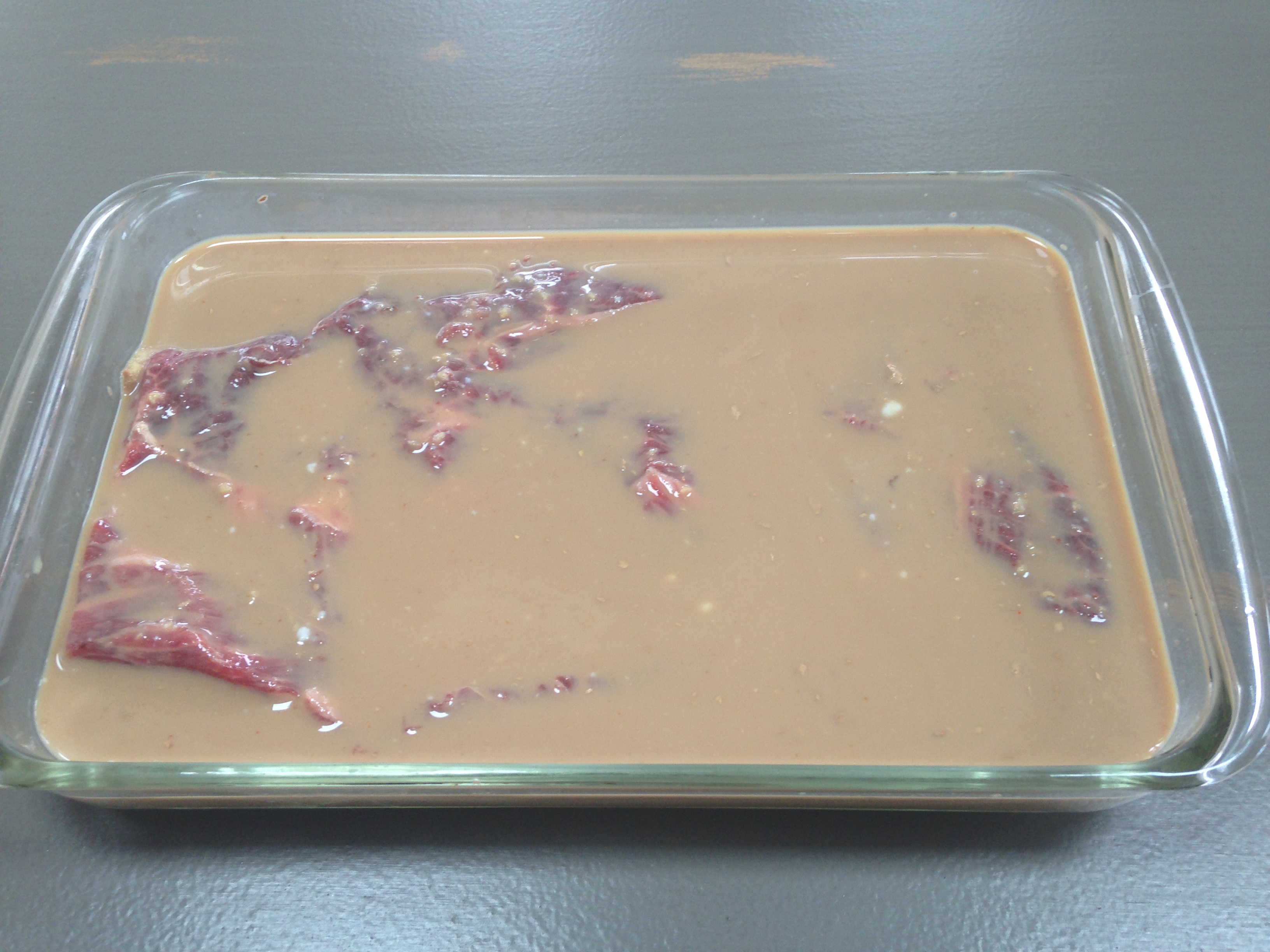 I didn’t see this recommended anywhere, but I decided to experiment with tenderizing the beef before cooking it. My friend Andy, who used to be a chef at Gramercy Tavern  once told me that the secret to excellent chicken wings, is to tenderize it for a few hours in soy sauce and buttermilk. He seemed repulsed by the thought of using the same technique with beef, but I decided to experiment anyhow. I’ve proved him wrong. It’s delicious. I highly recommend.

I soaked a large flat iron steak (if you can find flank steak, I’d recommend using that instead), in a bath of ginger (about 1 tsp fresh grated), sriracha (1 1/2 tsp), soy sauce (3 tbsp), skim milk (1/2 cup), and buttermilk (1/2 cup) for approximately 4 hours in the refrigerator.  I was told not to let beef tenderize in soy sauce for longer than that, because the sauce starts to cook the beef. I’m not entirely sure how that’s possible, but I heeded Andy’s advice, and I suggest you do as well!

After four hours soaking in the marinade, remove the beef from the fridge, dump the marinade down the sink and rinse the beef off quickly. Place the beef on a cutting board and cut the beef against the grain into thin (1/4”) strips. Place the strips into a bowl and gather the rest of your ingredients. 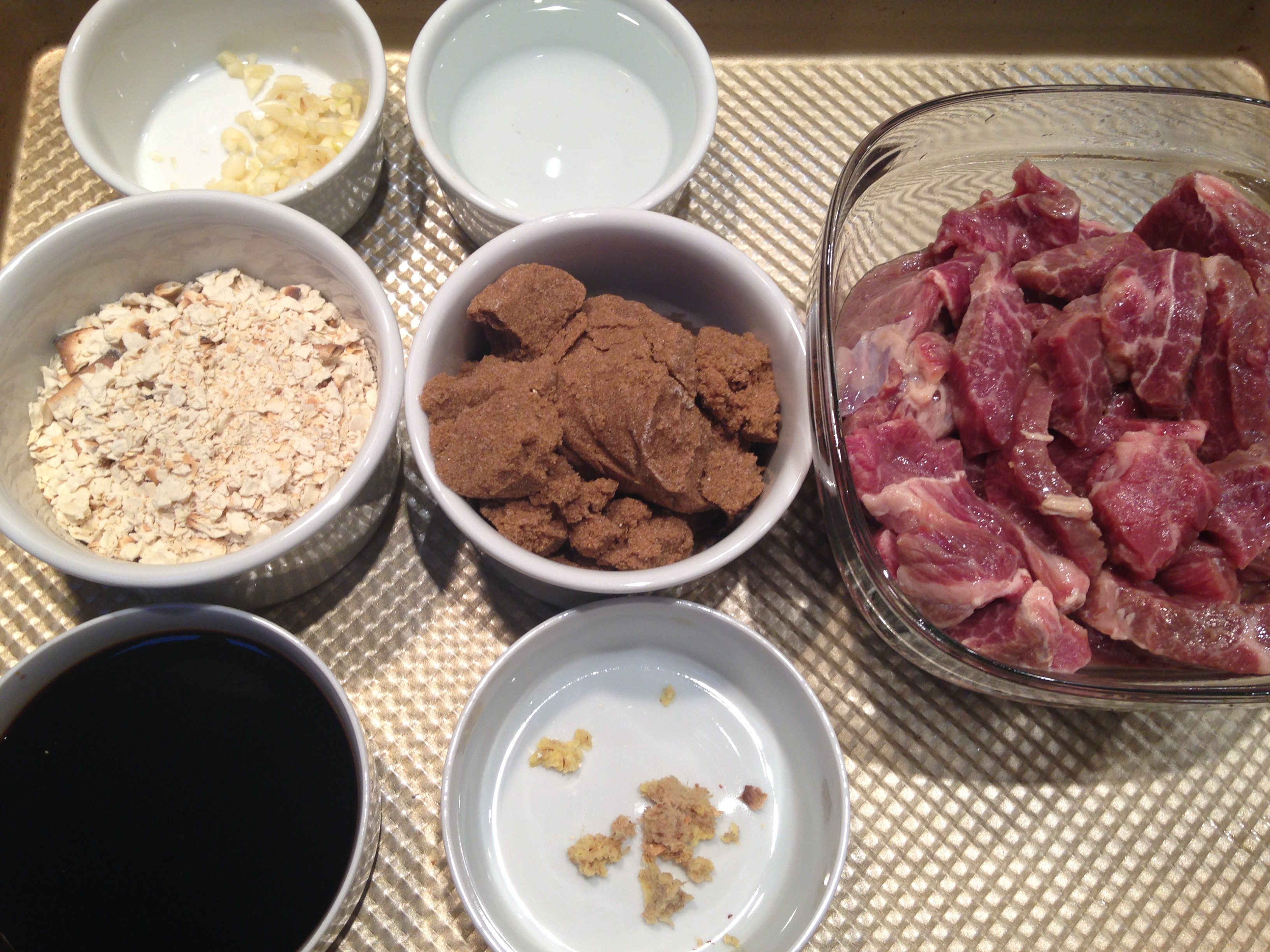 Left out of this photo is approximately 1 cup of canola oil, which is later used to fry/cook the beef. You will need 3/4 cup of soy sauce, 3 garlic cloves chopped, 1 tsp of grated ginger, 3/4 cup of brown sugar, 1/2 cup of water, and 1 cup of corn starch ( I used matzah meal/crushed matzah, because it was passover…sigh). If I were making this again, I would add some greens–1 chopped bok choy, 3 green onions (both sliced length-wise), and maybe some string beans (nothing like Chinese string beans!). I also suggest keeping the sriracha handy for an added kick.

Coat the beef strips in the corn starch/flour/matzah meal and leave to sit for a few minutes. Make sure the dusting is dry on the outside. If you see that the corn starch looks clumpy, give it another quick dip. 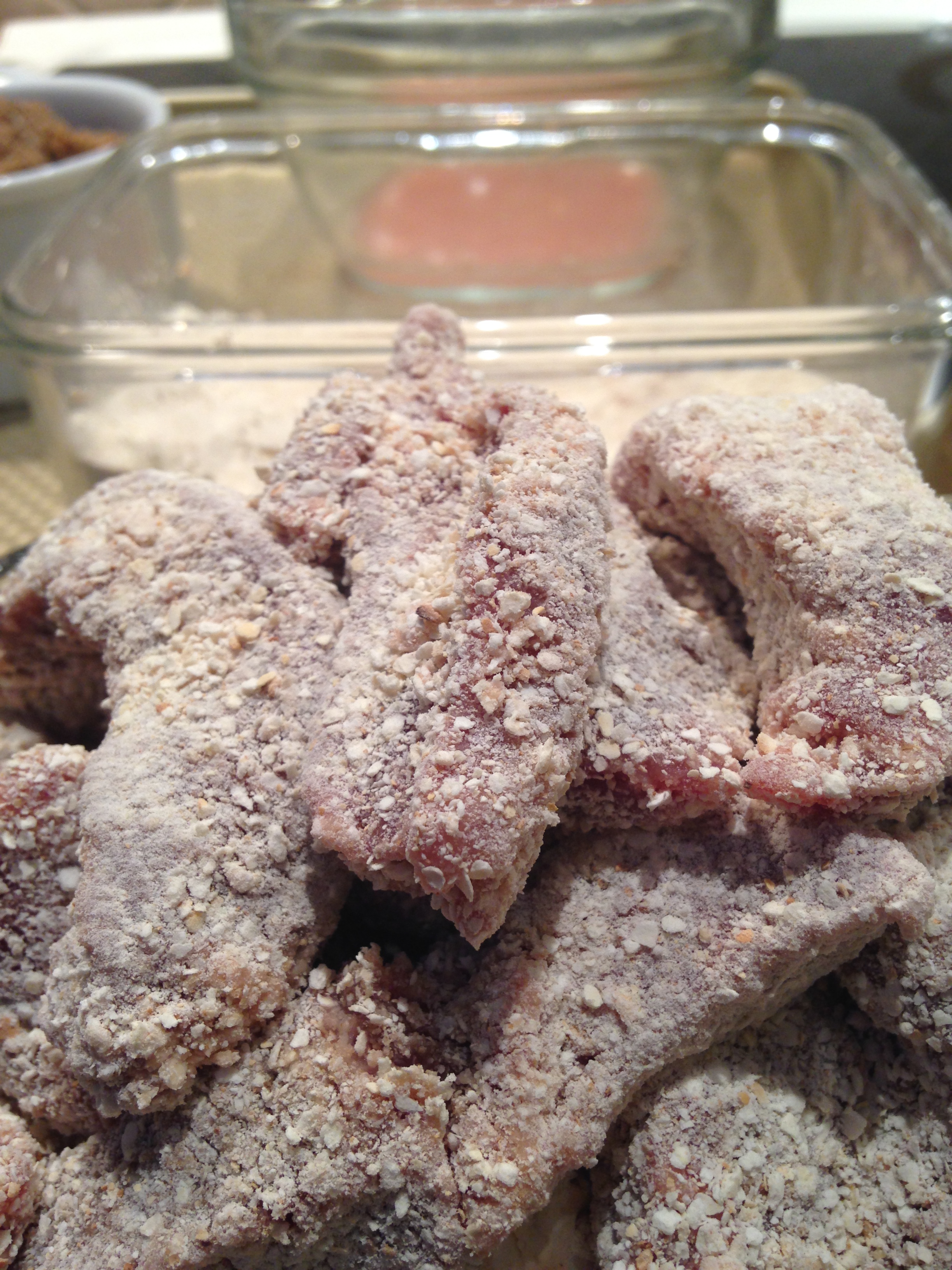 While the beef strips hang out, let’s make the sauce.

Dump two tbsp of oil into a large sauce pan and heat over medium heat. The oil should thin slightly, but shouldn’t crackle or steam. Add the ginger and the garlic and start stirring the contents with a heat-proof spatula or wooden spoon. Watch the garlic carefully. If you see the garlic bits turn brown, add the water immediately. This is just the beginning, so we don’t want the garlic to overcook just yet.  After the water, add the soy sauce and bring the mixture to a simmer. Allow the sauce to cook down slightly and slowly incorporate the brown sugar until it tastes how you’d like. If you add all of the sugar and realize you’ve started a new Chinese candy recipe, you can fix it by adding more soy sauce to the mixture and cooking it down again.  When you’re satisfied, remove from the heat for a bit, while you cook the meat. To cook the meat, add the rest of the oil to a wok and heat on medium-high heat. The point is to really fry that beef, so you’ll know if the oil is hot enough if you test it with a piece of beef and the oil goes to town. If it’s not hot enough, just be patient.

Once hot, quickly fry the beef. let the edges turn brown. If the inside still looks bright red, this is fine–the beef gets cooked again inside the sauce. Fry all of the beef quickly and remove to a paper towel and pat dry.

Place the sauce back on medium heat, add the beef to the sauce, and cook for a few minutes on a low simmer. The beef will quickly absorb the flavors of the sauce, so just pay attention to the beef. Remove it when it cooks through to the temperature you like. I removed mine at a nice and tender medium. Deeeeelicious! 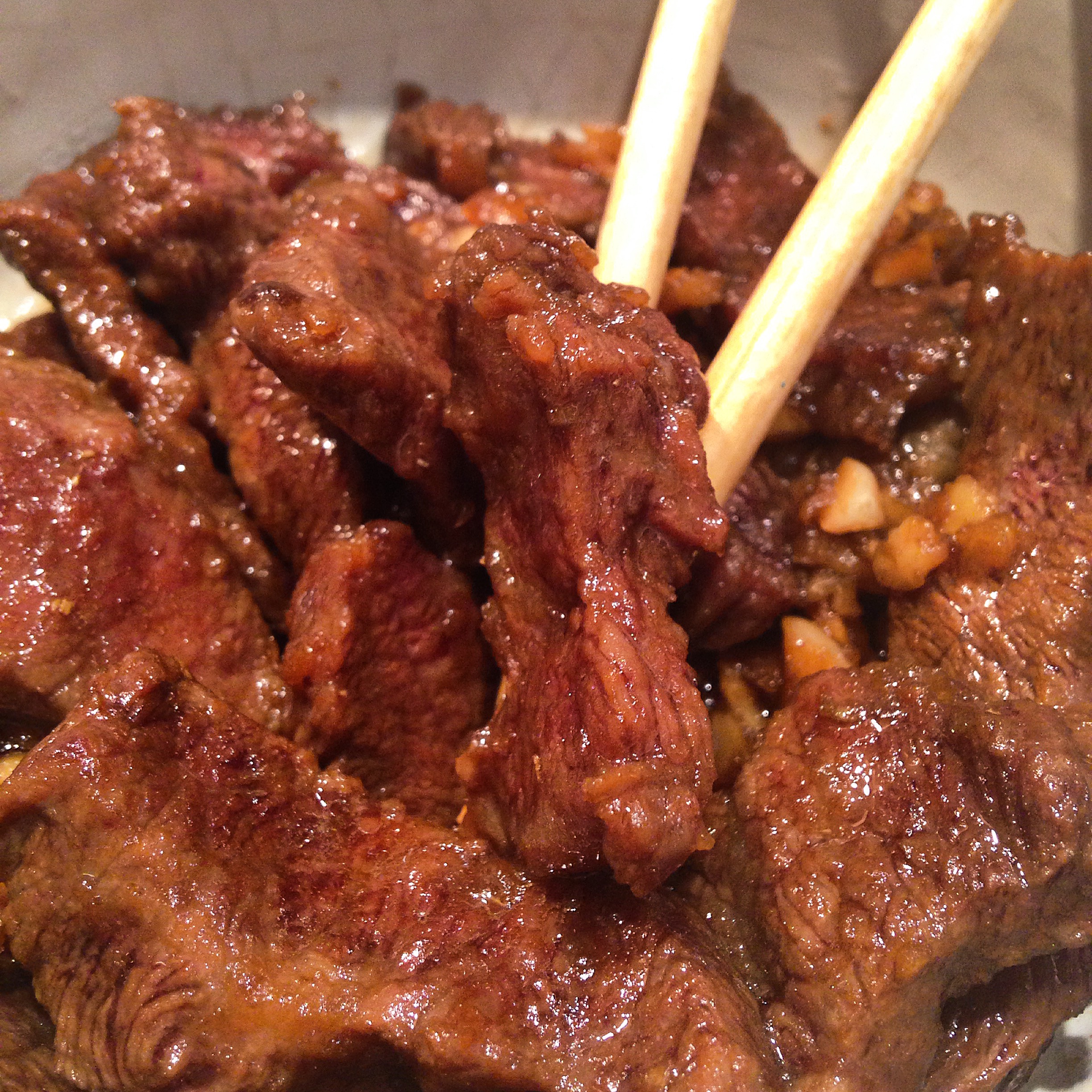 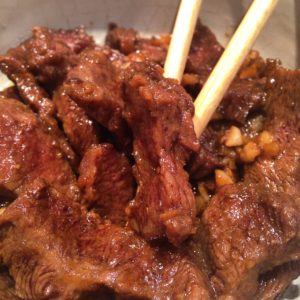