It’s becoming harder and harder to justify eating out for brunch these days. Ever since I made that delicious brioche french toast stuffed with marscapone cream and plum sauce, I’ve had a very can-do attitude about brunch foods. Of course, there is still much more to learn before I can claim master brunch maker status–pancakes and waffles, homemade bagels, home-cured lox, hash browns etc. But I’m almost there. Banana bread-check, poached eggs with avocado toast-check, french toast check, and now shakshuka. 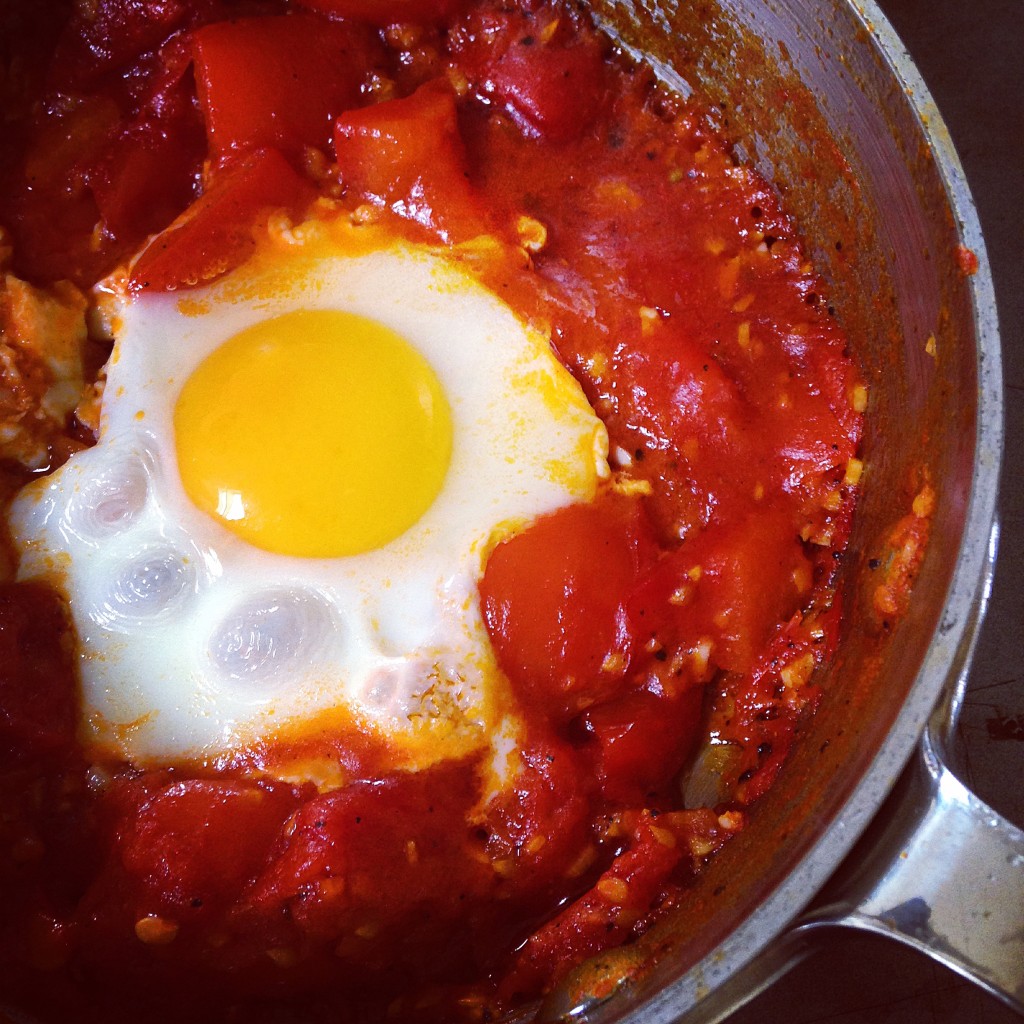 Now that I’ve made it, I am scratching my head to figure out why I haven’t tried my hand at shakshuka before.  The dish makes a mess of your pots, and I think the mess of it just had me intimidated. In contrast to poached eggs on avocado toast, for instance, which I can look at and discern the various cooking steps, I could never figure out the spices and vegetables that were mixed into the shakshuka to make it so damn tasty. I figured the mess meant that it was complicated and better saved for another day.

Well, today was that day, and,  to my surprise, I discovered that shakshuka is simple. In fact, it’s easy–much easier than poached eggs–easier, even, than scrambled eggs! Of course, there are a few more steps and ingredients, but for the most part, this dish is like a stew–just toss in the ingredients, stir occasionally, crack and egg on top, and serve.  I love that you can make it in individual pans, or use a larger pan and crack a few more eggs and it instantly can be served family style for, say, a family!

It makes sense, because Shakshuka, literally means mixture/mix, which, to me at least, is very close to mess. A fancy, delicious, mess.  Here’s how you do it:

First gather your ingredients for your mis en place, or as my mother likes to call it your “ma place.” For my individual version, all you’ll need is 1 red pepper; 1 large tomato (or the equivalent in smaller tomatoes); 3-4 good sized garlic cloves; 1 egg (or 2 if you dare); 1 tbsp of olive oil; 1 tbsp of harissa (I use Mina brand mild harissa, which I found at WholeFoods); 1/2 tsp of freshly ground black pepper; and a pinch to 1/4 tsp of salt.  If you’re feeling daring, you might also want to toss in 1/4 tsp of cumin, and a pinch of paprika. I could also imagine tossing in some fennel seeds or even za’atar spice but I haven’t tried this (yet…). 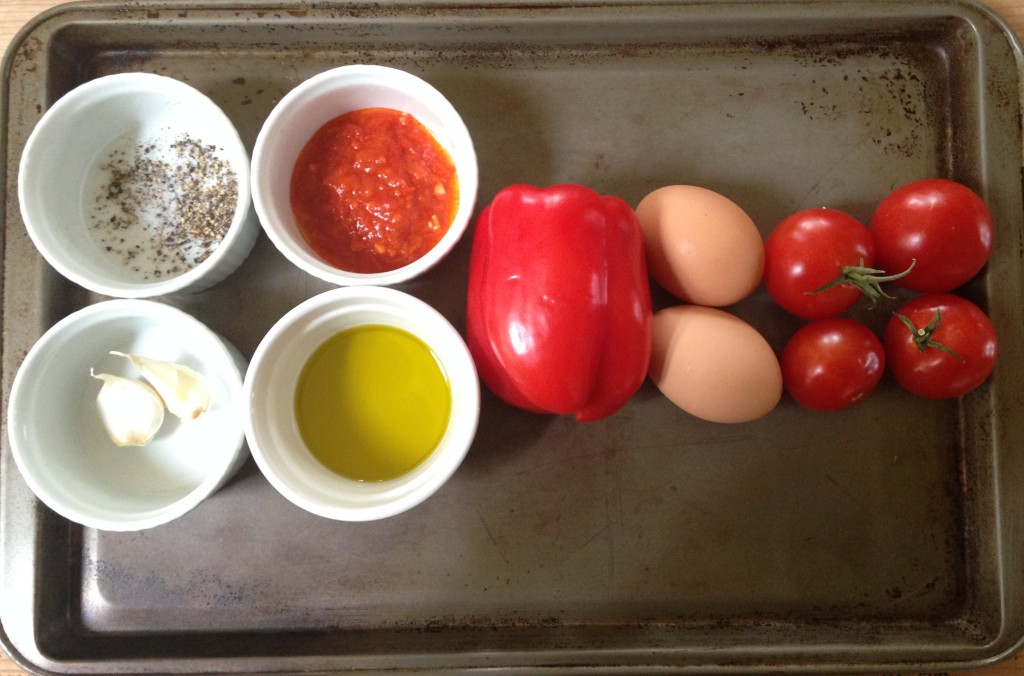 Now, chop up the red pepper, mince the garlic, and dice the tomatoes. To be honest, how small you chop the peppers and tomato(es), doesn’t really matter. The veggies break down in the pan as it cooks into a thick stew. As long as you watch it cook and take care to smush them in the pan, it will turn out perfectly. I was feeling lazy this morning, so I diced the peppers and literally only chopped the tomatoes in half. 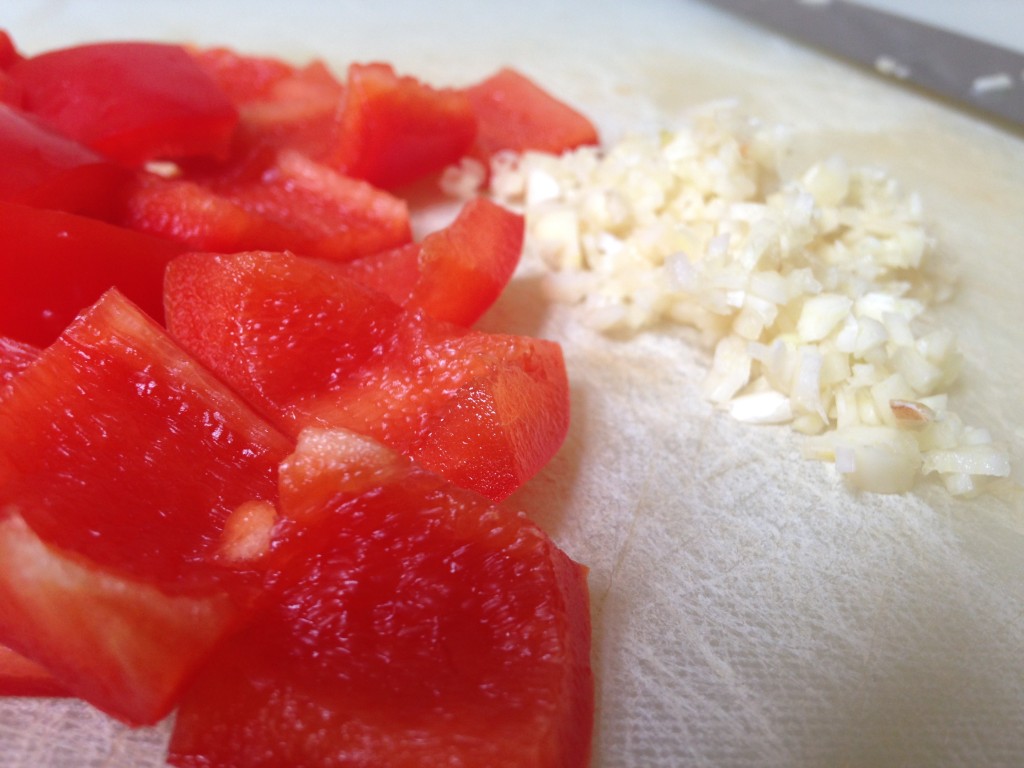 With the stove on medium, heat the olive oil until it easily runs around the pan (but it should not crackle or steam up). Toss in the vegetables, the harissa and spices and cook for approximately 10 minutes, stirring occasionally and smushing all of the tomatoes so that they lose their form entirely and become part of the stew. 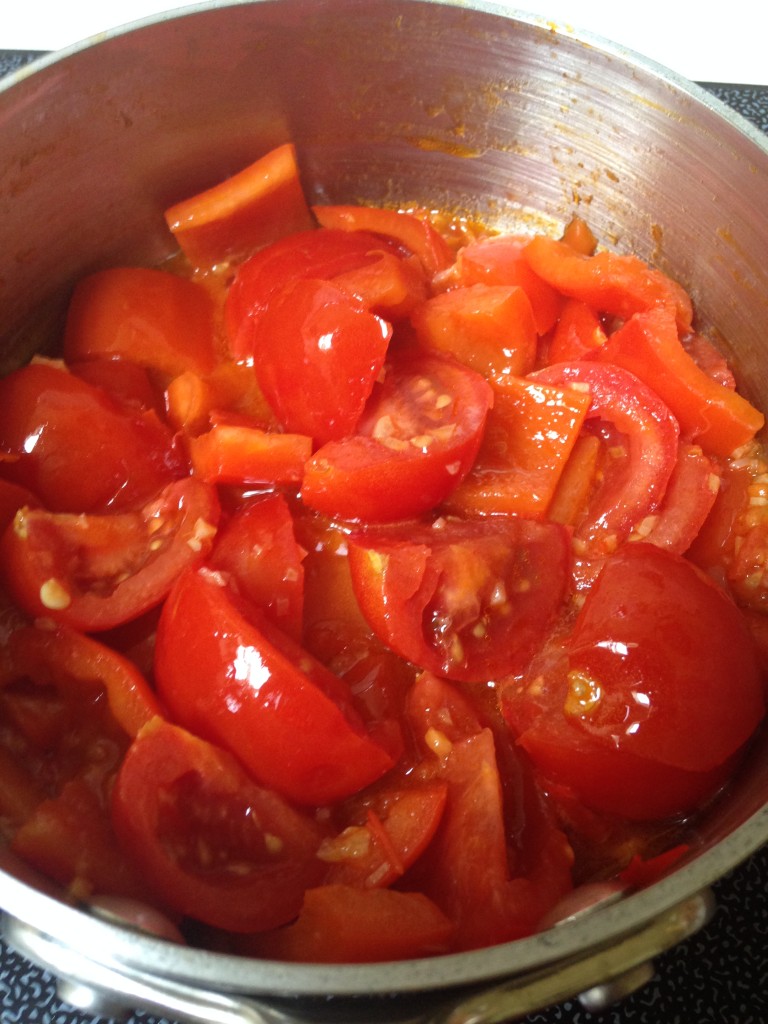 Allow the vegetables to turn into a stew and cook down significantly, but not too much such that it turns into a dry paste–remember that the shakshuka will continue to cook down once you crack an egg into it. When you’re ready, crack the egg into a small container. Using a spoon or spatula, create a small round divot in the sauce by pushing down on the tomato sauce and moving some of the pepper pieces around. Pour the egg into the divot. 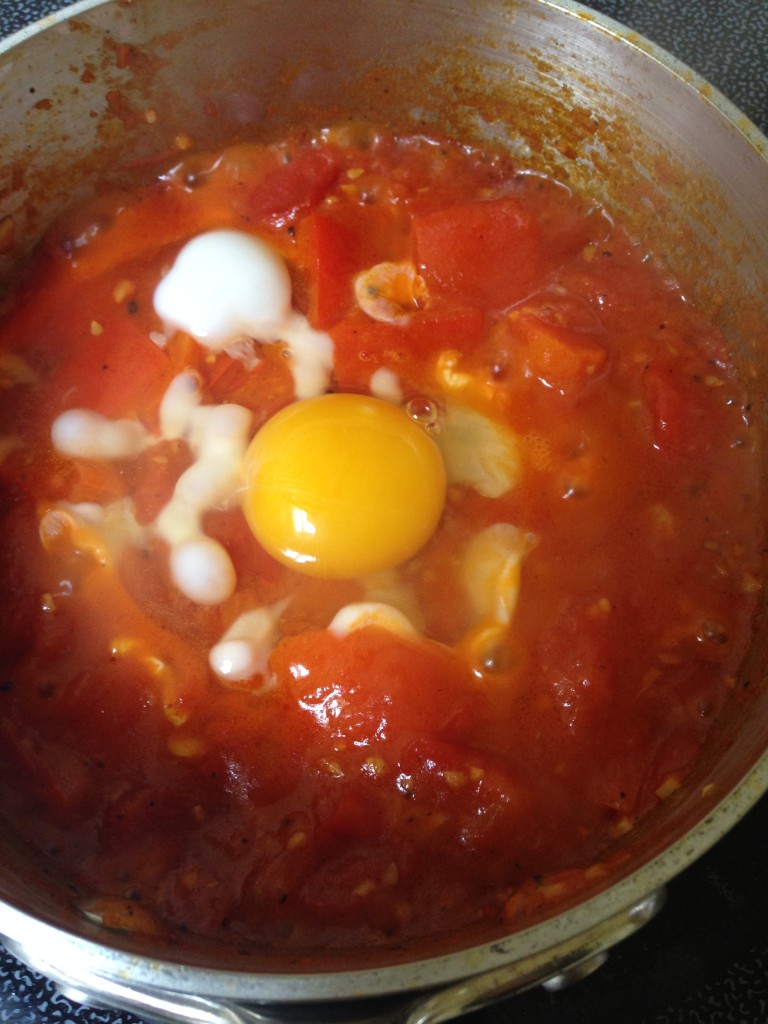 The egg will bubble at first. Turn the stove down to medium low and continue to cook for another 10 minutes  (approximately) without touching it.

When the shakshuka is ready to eat, the egg whites will be very white. The yolk may still look wet and shiny, but it if you tilt the pan slightly it should not look like it is going to roll out of place easily.

Remove from the heat and serve immediately. If you’re a little piggy like me, grate some cheese over top of the shakshuka–manchego if you please. Mmmmm. 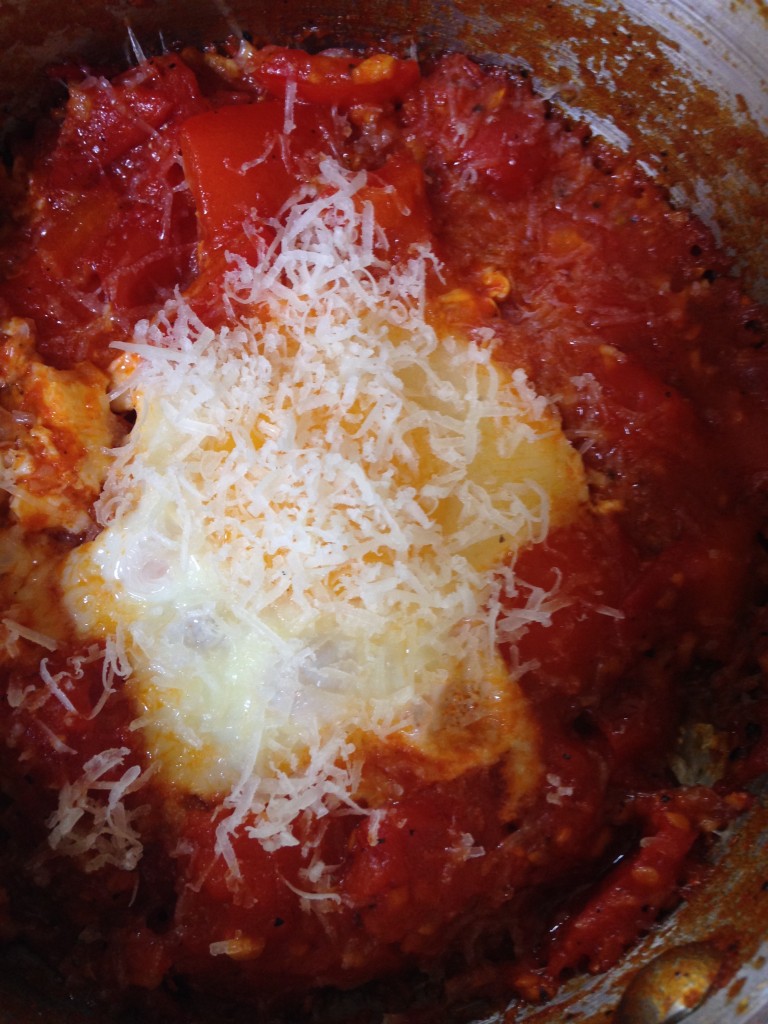 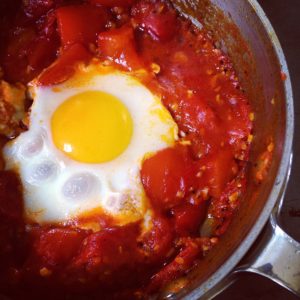